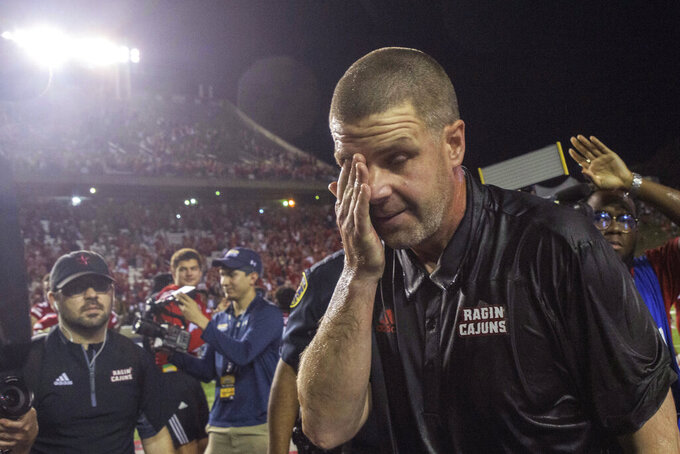 GAINEVILLE, Fla. (AP) — Billy Napier more than tripled his salary while moving from the Sun Belt to the Southeastern Conference.

A person familiar with negotiations says Florida's newest football coach agreed to a seven-year, $51.8 million contract that makes him the fifth-highest-paid coach in the powerhouse SEC. He could get bumped to sixth depending on Lane Kiffin's new deal at Mississippi.

The person spoke to The Associated Press on condition of anonymity Saturday night because neither Florida nor Napier has publicly released contract details.

Napier will make $7.1 million in his first season and will get a $100,000 raise annually before each of the remaining six years, the person said. Only Alabama's Nick Saban ($9.75 million), Texas A&M's Jimbo Fisher ($9 million), new LSU coach Brian Kelly ($8.6 million) and Georgia's Kirby Smart ($7.13 million) are due to make more in the SEC next season.

ESPN reported Kiffin's agreement was “in the range of $7.5 million annually.”

The Gators are expected to provide Napier’s full memorandum of understanding when he’s formally introduced Sunday afternoon in Gainesville.

Napier signed a new contract at Louisiana-Lafayette before the 2021 season that nearly doubled his pay, raising his total compensation to $2 million annually. That deal included a $3 million buyout.

His new contract is similar to what the Gators had been paying former coach Dan Mullen. Mullen signed a three-year contract extension in June that raised his annual salary to $7.6 million.

Mullen was fired last month following the team’s fourth loss in five games. Mullen’s deal included a $12 million buyout that will be paid over seven installments, with a $6 million payout coming this month. Mullen will then get $1 million every July 15 through 2027.

Napier remained with ULL through the Sun Belt Conference championship game, which the 20th-ranked Ragin' Cajuns won 24-16 on Saturday. Napier improved to 40-12 in four seasons in Lafayette, including 33-5 the past three years.

Napier is a former receivers coach at Alabama under Saban and a former offensive coordinator at Clemson and Arizona State. He has been one of college football’s rising stars and hottest names in recent years. He was in the mix for openings at Virginia Tech and TCU.

He also turned down Mississippi State after the 2019 season and backed away from South Carolina and Auburn following the 2020 season. His name has been connected to other SEC openings, too, including Mississippi and Missouri.

He takes over a Florida program that’s been in disarray for more than a year but is close to opening an $85 million football facility that could help the team catch up in recruiting. And that could help the Gators close the gap on SEC superpowers Georgia and Alabama.