Around the Pac-12: Verdell turns heads among Pac-12 RBs 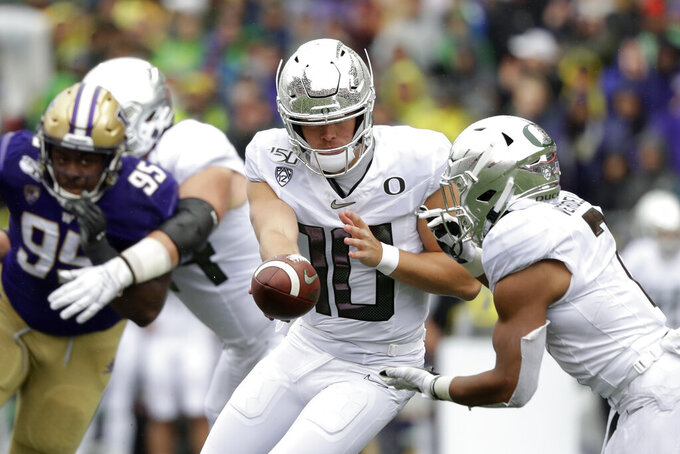 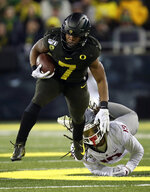 In a lot of ways, CJ Verdell is like Oregon predecessor LaMichael James: What he lacks in size he makes up for with toughness and speed.

The Ducks sophomore has emerged as a running back to watch with a record-setting performance against Washington State, joining Utah's Zack Moss and UCLA's Joshua Kelley among the Pac-12's top backs at this point of the season.

The league returned six running backs this year who rushed for more than 1,000 yards last season: Verdell, Moss, Kelley, as well as Arizona State's Eno Benjamin, Arizona's J.J. Taylor and Oregon State's Jermar Jefferson. Benjamin had 1,642 yards to set a single-season record for the Sun Devils while Jefferson set a Pac-12 record for freshmen with 1,380 yards.

Verdell set some records of his own last Saturday when he rushed for 257 yards and three touchdowns in No. 7 Oregon's 37-35 victory over the Cougars.

It was the most rushing yards ever for an Oregon player at Autzen Stadium and ranked fourth all-time for a Duck. It was also the first 200-yard rushing game by a Duck since Royce Freeman in 2016 and the first time an Oregon back has had 200 yards and three touchdowns since Kenjon Barner in 2012.

But wait, there's more: Verdell has the third-most rushing yards for an FBS-level player this season. And to top it off, Verdell also caught four passes for 56 yards, becoming the first player in the nation with at least 250 rushing yards and 50 receiving yards in the same game since Oklahoma's Joe Mixon in 2016.

"I felt great, just running the ball," he said. "The O-line played great the whole night. Without them I wouldn't be able to get any of those yards. All the credit goes to those guys up front."

Indeed, Oregon's offensive line is one of its strengths. The veteran group has 193 collective starts, most for an O-line in the nation.

Verdell, who is just 5-foot-9 but powerfully built, has rushed for 753 yards and five touchdowns this season. He burst on the scene last season as a redshirt freshman when he was the only player with at least 1,000 yards rushing and 300 yards receiving in the Power 5.

Verdell's performance wasn't the only one of note this past weekend:

"He's a special back and he's got the whole package," said coach Kyle Whittingham. "I mean he's got a great skill set and we're fortunate to have him, fortunate he came back for his senior year."

Moss has rushed for a league-leading 10 touchdowns this season and averages 104 yards rushing a game to rank second in the league.

JOSHUA KELLEY, UCLA: Kelley rushed for 164 yards and a career-high four touchdowns in a 42-32 victory over Arizona State last weekend, the first Bruin with four rushing TDs in a game since Myles Jack in 2013.

A junior, Kelley is just the fourth player nationally with four rushing touchdowns in a game this season, and first in the Pac-12.

"You know, I like playing at the Rose Bowl," Kelley said following the performance. "We needed a win here, for sure. We haven't had a win at home this season. So that was an extra incentive for us. But our offensive line was so amazing. I can't do that without them."

Kelly is averaging 105 yards a game this season, tops in the Pac-12, and he's second in the league to Moss with eight total touchdowns.

J.J. TAYLOR, Arizona. The Wildcats junior ran for 107 yards at Stanford last weekend for the 10th 100-yard game of his career. He now has 3,030 career rushing yards, ranking him seventh all time at Arizona. He also had a career-high five catches for 53 yards. But the Wildcats fell to the Cardinal 41-31.

SALVON AHMED, Washington: The Huskies had a bye last weekend, but Ahmed ran for 140 yards and a team-high seventh touchdown of the season in a 35-32 loss to Oregon two weeks ago. Four of his touchdowns have come in Washington's last two games, and he scored in five of the seven games he's played.

Ahmed averages 94.6 yards rushing a game, third in the league.