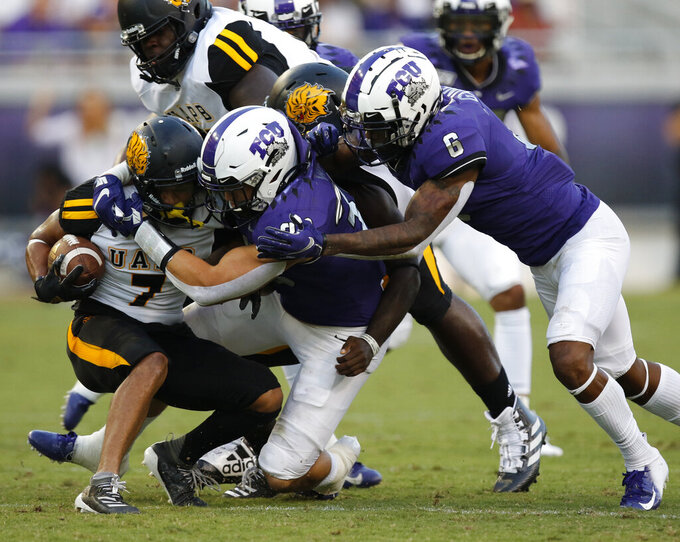 TCU's Garrett Wallow (30) and Innis Gaines (6) tackle UAPB's Tyrin Ralph during the first half of an NCAA college football game Saturday, Aug. 31, 2019, in Fort Worth, Texas. (David Kent/Star-Telegram via AP) 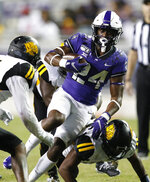 FORT WORTH, Texas (AP) — TCU has two weeks before its next game with Purdue, and coach Gary Patterson said that will give everyone the chance to continue all the guessing about who will emerge as the Horned Frogs' primary quarterback.

Not much was decided Saturday night as TCU debuted two quarterbacks in graduate transfer Alex Delton and true freshman Max Duggan. Both were ho-hum in leading TCU to a 39-7 victory over FCS school Arkansas-Pine Bluff in the season opener for both teams.

Delton, who played 14 games with six starts the last two seasons at Kansas State, started but shared time with Duggan.

Delton was more impressive running the ball (67 yards rushing on seven carries) than passing (10 for 22 for 119 yards). Duggan led all three of the Horned Frogs' touchdown drives and finished 16-for-23 passing for 165 yards.

"I thought they stayed pretty composed," said TCU senior receiver TreVontae Hights, who set a career high with eight catches for 108 yards. "Their leadership was great. I feel comfortable with either one of them."

Patterson wasn't happy, however, that five TCU drives stalled inside the red zone.

Patterson said he could invoke a five-man quarterback competition the next two weeks, joking that he could even move some quarterbacks to safety or nose guard.

But TCU's other three quarterbacks in the mix - Michael Collins, Justin Rogers and Matthew Baldwin - aren't likely to pass up either Delton or Duggan.

Reagor ran past Pine Bluff freshman cornerback Jordan Brown at the line of scrimmage to catch a 37-yard touchdown pass from freshman quarterback Max Duggan to give the Horned Frogs a 29-7 lead.

Just prior to Reagor's touchdown, he muffed a punt that was recovered by Pine Bluff at the TCU 37. That set up the Golden Lions' only score, a 1-yard touchdown run by KeShawn Williams that cut TCU's lead to 22-7. Reagor also muffed a punt inside the 15 in the second quarter, but TCU recovered it.

"We fumbled two punts, and both of them came on punt-safe, so we didn't even have a return on," Patterson said. "What Jalen has to learn is it's a critical play and it can't always be a great play. You have to get out of the way.

"You guys know how I feel about this. I'm not happy. There's a bunch of things that need to get fixed. But I think we saw enough that we have the potential to be what we want to be."

Pine Bluff, an FCS team that finished 2-9 last year, entered the game as a 53-point underdog. But the Golden Lions never appeared overmatched.

Arkansas-Pine Bluff: The Golden Lions, who return 15 starters (nine on offense), didn't back down. They were within two scores late in the third quarter. Pine Bluff's defense was particularly strong in the red zone, forcing five field goal attempts.

TCU: This wasn't a dominant effort by the Horned Frogs against a much inferior opponent. TCU appears to still be trying to find an offensive identity with its quarterback competition, although Duggan was more productive.

TCU quarterbacks last season were inconsistent for the most part, finishing with only 18 touchdown passes and 15 interceptions, as the Horned Frogs were mediocre themselves at 7-6.

Collins, the former Penn transfer, started four games late last year before a right ankle injury forced him to miss all of spring drills. The junior also missed two weeks of practice in August with a foot injury.

TCU has next week off before playing its first road game Sept. 14 at Purdue.