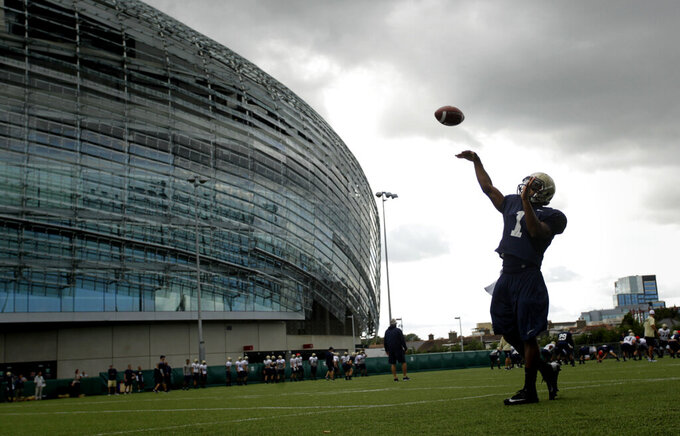 College football has been around the world since Ireland first hosted a game more than 30 years ago, with locales as disparate as Tokyo and Toronto staging games.

Australians loved the touchdowns and halftime theatrics, not to mention the hot dogs and beer, the latter of which ran out during California’s 51-31 win over Hawaii in 2016. Fordham and Holy Cross have taken their rivalry abroad twice, the second time before not quite 2,500 fans in Bermuda in 1995.

“We intend to kick off the season every year in Ireland,” said John Anthony, founder of Anthony Travel and Irish American Events, the game's organizer.

Ireland has a five-game deal in place for the series dubbed the Aer Lingus College Football Classic. Notre Dame was set to headline the first one, against Navy, in 2020 but it was called off because of the pandemic. Last year’s Nebraska-Illinois game was moved to Champaign for the same reason.

The Big Ten showdown Saturday will have attendance in the “mid-30s,” Anthony said, including 13,000 fans coming from the United States.

International ticket sales were hurt by COVID-19 concerns, and local fans have not seen an American football game live since 2016 when Georgia Tech beat Boston College, 17-14. It probably didn't help, too, that both Nebraska and Northwestern are coming off 3-9 seasons.

Still, it’s providing the largest inbound tourism event of the year for Ireland. And as a Northwestern home game, it figures to draw more than the average attendance of 30,679 at Ryan Field last season.

“The COVID backdrop obviously had an impact, but this is about getting it back and growing it over the next number of years,” Chambers told The Associated Press. “It’s something we’re committed to. We’re confident around the economic evaluation of this and the benefit it brings the country but also the opportunity it brings for everyone that’s coming, whether it’s tourism, enterprise, personal or business.”

Anthony would not disclose specifics of how much the teams get financially but for Northwestern it will “replace the revenue that they could get from a home game ... they’re not doing it for less than that.” Northwestern, a private institution, did not respond to a request for comment.

"(A) school does not make this decision because they want to make a bunch of money. They want it for the experience for their student-athletes and their university and following and their constituency,” Anthony said. “When you get 5, 10, 25,000 fans from your school in a totally foreign land just because you’re putting on a game there, you’ve won already.”

Northwestern coach Pat Fitzgerald called the trip a “once in a lifetime opportunity,” noting that most of his players have never left the U.S.

“We’re an international school and any time we get an opportunity to do something unique, I’m all for it,” he said Monday in suburban Chicago.

Nebraska fans will comprise most of the U.S. contingent.

Doug Ewald, executive associate athletic director and chief financial officer for the Cornhuskers, said Nebraska gets the charter flights plus $250,000 to spend as they like, and he estimated the cost of a typical conference away game is $150,000 anyway.

“At best this is probably a break-even proposition for us,” Ewald told The AP. Nebraska also isn’t sending over any merchandise to sell, mainly due to licensing and tax issues.

Australia hosted the most recent international regular-season game. Stanford routed Rice 62-7 in 2017 a year after Cal’s victory over Hawaii. The New South Wales state government had paid millions to fly the teams over in tourism promotions.

Sandra Chipchase, the former CEO of Destination NSW, said both games were successes thanks to visitor spending and “free publicity” through media stories and images of Sydney. The first game drew more than 61,000 fans and the second — played in a smaller stadium — 33,000.

After successfully hosting Major League Baseball — the Los Angeles Dodgers and Arizona Diamondbacks opened the 2014 season Down Under — the Aussies turned to college football in a bid to entice the NFL.

“We wanted to use it to try to convince the NFL to bring an opening game or a game at some stage down here,” Chipchase said. “We wanted to show them how popular it was.”

Ireland first hosted a game in 1988 when Boston College beat Army 38-24. This will be Northwestern's first time abroad and Nebraska's second; the Huskers beat Kansas State 38-24 in Tokyo in 1992.

Teams for the Dublin games beyond next year haven’t been announced.

“We are talking to schools in the SEC and other big schools in the Big Ten," Anthony said. "We are getting interest from some of the highest levels of college football.”