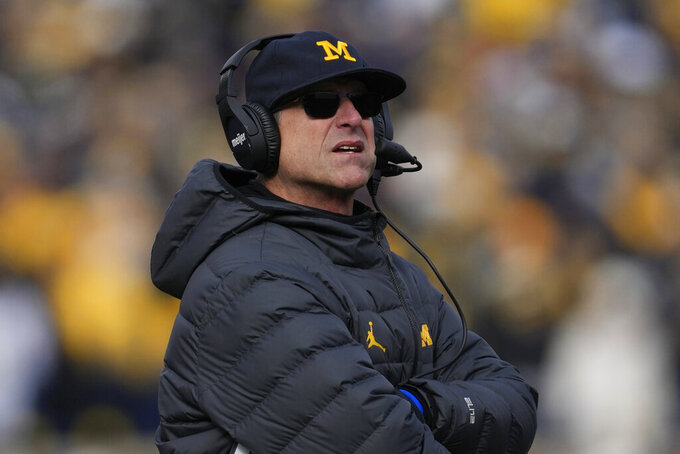 Things to watch during Week 13 of play in the Big Ten Conference:

GAME OF THE WEEK I

The stakes are always high in “The Game," never more than on Saturday. The winner represents the East in the Big Ten championship game and remains in prime position for a College Football Playoff bid. The loser still has a path to the playoff and, worst case, a spot in a New Year's Six bowl. The Buckeyes have been stewing for a year over their first loss to Michigan since 2011. The Wolverines are going for back-to-back wins over Ohio State for the first time since 1999-2000. This will be the fourth time in 19 meetings that both teams are ranked in the top five when they meet.

GAME OF THE WEEK II

This Black Friday game is nowhere near as impactful as Michigan-Ohio State, of course, but it spotlights what's been a remarkable turnaround by Kirk Ferentz and the Hawkeyes. Iowa will secure the West title and head back to the Big Ten championship game with a win over the swooning Cornhuskers. Iowa has reeled off four wins in a row since opening conference play 1-3. Playing in the worst division in the Power Five, the Hawkeyes have been able to compensate for one of the nation's worst offenses by having a defense that is among the best.

Indiana is a 10 1/2-point home underdog against Purdue, according to FanDuel Sportsbook. The game for the Old Oaken Bucket is the Hoosiers' bowl — unless they get to 5-7 and are needed to fill a bowl slot — and there's nothing they would love more than to squash their rival's hopes of going to the conference championship game in the event Iowa loses to Nebraska on Friday. The Hoosiers have some mojo after a double-overtime win at Michigan State ended a seven-game losing streak.

Illinois RB Chase Brown is poised to add significantly to his nation-leading total of 1,582 rushing yards against a Northwestern defense allowing a Big Ten-worst 4.64 yards per carry. The Doak Walker semifinalist is averaging a Bowl Subdivision-high 28.1 carries per game and has had at least 29 in five of the last six games. The Illini have lost three straight and, to sneak into the Big Ten title game, need to win the Land of Lincoln Trophy and have Iowa and Purdue lose.