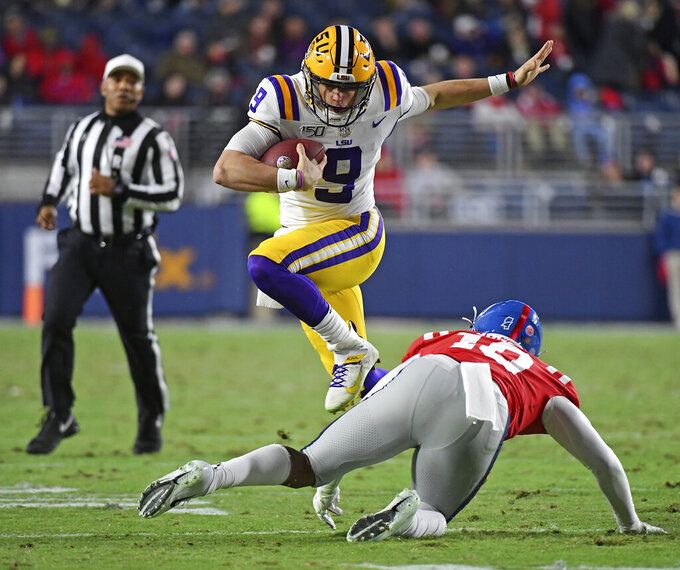 Burrow’s college career has been transformed dramatically in a matter of two seasons since the seldom-used backup at Ohio State transferred to LSU, where he not only became a starter, but smashed school records and emerged as a Heisman Trophy favorite this year. Now comes Burrow’s final game in Tiger Stadium on Saturday night.

“This place means so much to me,” Burrow said. “Everyone has been so great. I never could have dreamed that this was going to happen, the reception from the people in Louisiana to an Ohio kid who transferred here. It's been such a great two years and I hope I can show some appreciation to the fans.”

It probably doesn’t hurt that Burrow, who last season led LSU to its first 10-win season since 2013 and a Fiesta Bowl victory, followed that up with single season school records of 4,104 yards and 41 touchdown passes this season while completing 78.9% of his throws.

“Remember, here's a guy who moved all the way across the country from Ohio to Louisiana and had to make adjustments,” Texas A&M coach Jimbo Fisher said. “People don't take into account how that affects guys, and I'm sure he's more comfortable there. ... He's obviously the leader of that team, and you can see it. I think the guy's playing outstanding football. He's playing as good as any quarterback I've seen in a long, long time.”

Some other things to know about Saturday’s Texas A&M-LSU matchup:

LSU safety Grant Delpit is expected to return this week from an ankle injury that sidelined him last week against Arkansas and which has hobbled him since mid-October.

Delpit, a preseason All-America selection, is having a down year statistically, primarily for two seasons. Not only have injuries nagged him, but he’s been positioned deeper in the secondary this season than last, when he often played closer to the line of scrimmage, where he could blitz, help with the run, or cover shorter pass routes. Delpit was moved in part because coaches believe he has the versatility to play deep while fellow defensive back Jacoby Stevens, who had three sacks last week, is better suited to playing a hybrid safety-linebacker role.

“A lot of people don’t understand what goes on behind the scenes,” Delpit said. “I haven’t made a lot of big-time plays or anything like that, but at the same time I’m playing a different position and I’m not really around the ball a lot. But I’m not complaining. We’re winning.”

Fisher and one the Aggies’ top receivers, Jhamon Ausbon, have considerable ties to Baton Rouge.

Fisher was an assistant at LSU for seven seasons under Nick Saban and Les Miles. Ausbon, who grew up in Houston, has visited family in Baton Rouge throughout his life and strongly considered playing for LSU. This season, he’s been one of A&M’s offensive leaders statistically, with 63 catches for 840 yards, and Fisher noted that Ausbon even contributes when he doesn’t get the ball.

“He's a guy who could go get the numbers and want to be the superstar, but he'll go do all the little things a lot of people don't like to do,” Fisher said. “He is a true, true team guy that I can't say enough good things about. Tremendous character. Tremendous human being.”

While odds makers have listed LSU as more than two-touchdown favorites, Burrow was quick to point out that all four of A&M’s losses have come against quality teams.

“We feel like if we play the way we're capable of playing, we'll win the game,” Burrow began. “But they obviously have four losses this year and three of those teams (No. 3 Clemson, No. 5 Alabama and No. 4 Georgia ) are in the top five currently and (No. 16) Auburn was in the top 10 for a lot of the year, so their losses are really good losses.”

The Aggies’ Kellen Mond presents the type of dual-threat challenge against which LSU’s defense has struggled at times, particularly at Mississippi.

Mond ranks third in the SEC with 2,710 yards passing and fourth in TDs passing with 19. He also has 392 yards and seven TDs rushing.

“Last year he had a lights-out game against us, running the ball, throwing the ball,” Orgeron said. “This is one of the better players we're going to see all year.”