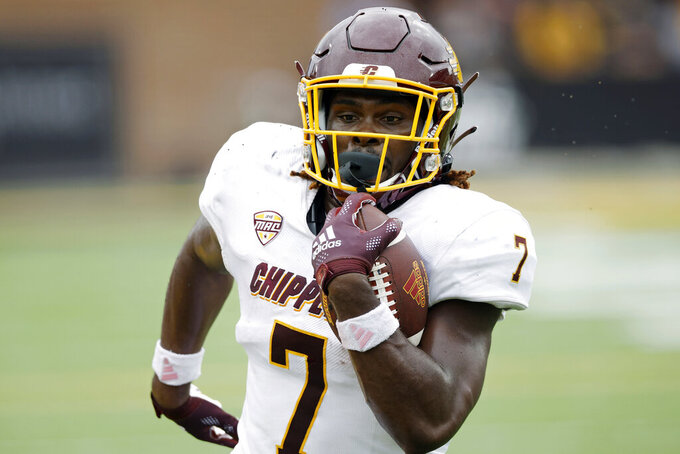 Line: Washington State by 7, according to FanDuel Sportsbook.

Central Michigan's trip west has turned wild, and the Chippewas still have the goal of winning a bowl game. It's just a different bowl game. The team was already in Tucson, Arizona, when Boise State bowed out of the Arizona Bowl because of COVID-19 issues. Miami did the same with the Sun Bowl, so the Chippewas agreed to switch to the game about a four-hour drive away in El Paso, Texas. It will be the first Sun Bowl for Central Michigan and the third for Washington State. The Chippewas are looking for their first bowl victory since 2012. The Cougars are 8-8 in bowls.

Washington State QB Jayden de Laura vs. Central Michigan pass defense. The freshman playing his first full season is averaging 250 yards passing per game with 23 touchdowns. The Chippewas are among the worst nationally against the pass, allowing an average of 266 yards per game.

Central Michigan: RB Lew Nichols III leads the nation with 1,710 yards rushing in the freshman's first full season. He averaged 209 yards in the final three games of the regular season and scored eight touchdowns. Nichols has 15 TDs for the season.

Washington State: WRs Travell Harris and Calvin Jackson. The Florida natives have shared the wealth. Harris finished the regular season third in the Pac-12 in catches (73) and yards (801) and second in touchdowns (nine). Jackson was fourth in receptions (63), second in yards (955) and third in TDs (seven). Jackson led the conference at 80 yards per game.

Washington State coach Jake Dickert will be on the sideline for the first time since having the interim tagged removed the day after an Apple Cup win over Washington. The Cougars were 3-2 after Nick Rolovich was fired for refusing to meet a state mandate for all employees to get the COVID-19 vaccine. ... This is the second bowl game at Central Michigan for coach Jim McElwain, who took over in 2019 after getting fired at Florida midseason in 2017. The Chippewas are 0-5 in bowls since beating Western Kentucky in the 2012 Little Caesars Bowl. ... The Washington State defense was fourth nationally with 27 takeaways, including the third-most fumbles (13). ... Central Michigan's Kalil Pimpleton is the only FBS player with two punt returns for touchdowns in the same game. He erased a 14-0 deficit by himself in a five-minute stretch that included a TD catch in a 42-30 victory over Western Michigan. ... Washington State is 2-0 in the Sun Bowl.