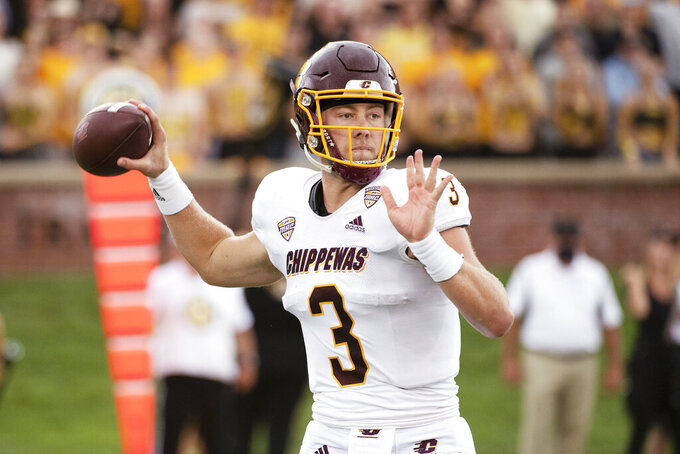 Central Michigan quarterback Jacob Sirmon prepares to throw a pass during the first half of an NCAA college football game against Missouri, Saturday, Sept. 4, 2021, in Columbia, Mo. (AP Photo/L.G. Patterson)

BATON ROUGE, La. (AP) — Central Michigan coach Jim McElwain and the Chippewas have demonstrated already this season that they can go into an SEC stadium and be competitive.

Yet McElwain is reluctant to characterize a visit to LSU’s 102,000-seat Death Valley, where the Chippewas (1-1) will meet the Tigers (1-1) on Saturday night, as similar to playing at Missouri, where Central Michigan lost 34-24 two weeks ago.

"Believe me when I tell you this: The difference between playing at Missouri and playing at LSU in Death Valley at night – it's quite a bit different,” McElwain said.

When he was the head coach at Florida from 2015 to 2017, he took the Gators into Tiger Stadium twice. In 2015, he was victimized by an LSU touchdown on a fake field goal in a 35-28 Tigers triumph. One season later, McElwain celebrated an SEC East title on that same field when a late goal-line stand preserved a 16-10 victory in a game relocated from Gainesville, Florida, to Baton Rouge because of Hurricane Matthew.

Now Louisiana is recovering from Hurricane Ida. But Tiger Stadium was able to host LSU's 34-7 romp over McNeese State last week without the type of pandemic-related attendance restrictions of 2020 — and will be welcoming another big crowd this weekend.

“The atmosphere is like no other," McElwain said. “The fans are great. They are rabid about their home team and they make it something special. They don’t cut you any slack.”

Orgeron knows not to take McElwain, or a non-power conference team, for granted.

Orgeron was LSU's interim coach when the Tigers lost to McElwain's Gators in 2016. In Orgeron's first full year on the job, LSU stunningly lost at home to Troy.

Orgeron made note of the fact that the Chippewas have averaged 34.5 points and 238.5 yards rushing in their first two games.

And LSU players have echoed Orgeron's sentiments about the importance of not overlooking non-conference foes. It's a warning Tigers players were inclined to heed since falling 38-27 at UCLA on Sept. 4.

“I don’t downplay nobody just because they’re not SEC,” LSU receiver Kayshon Boutte said. "I feel like, UCLA, we kind of didn’t respect our opponent and we got it handed to us.”

The performance of LSU's offensive line has bothered Orgeron, who lamented poor run-blocking at UCLA and inadequate pass protection for quarterback Max Johnson.

“It all starts with our protection first. That’s mainly where our breakdowns have been,” Orgeron said. "I do believe the offensive line has to jell. We have to help them out. The offense is not performing like we want to perform right now. That’s obvious.”

Central Michigan's running game is led by Lew Nichols, who has been named to the watch list for the Doak Walker Award, given to the nation's top running back.

Nichols, who has rushed for 214 yards and two touchdowns this season, ran for 135 yards and a touchdown at Missouri before seeing his workload dialed back in last week's 45-0 rout of Robert Morris.

LSU has been working this week on speeding up it's offensive tempo and scaling back a process Orgeron calls, “check with me,” in which the QB looks to the sideline before the snap to see if coaches want to change the play because of how the defense has aligned.

“We’re going to minimize the check-with-me," Orgeron said. "It does give the defense a chance to change their defense when we’re checking with me, and they have changed their defense almost every time.”

Against McNeese State last week, York twice set records for the longest field goal in Tiger Stadium history, hitting from 55 yards and then 56.

LSU expects to be without running backs coach Kevin Faulk, who is grieving the death this week of his 19-year-old daughter, Kevione.

Kevione was the youngest of Faulk's three children. Her cause of death has not been disclosed.