For college football on TV, 'the season itself is the story' 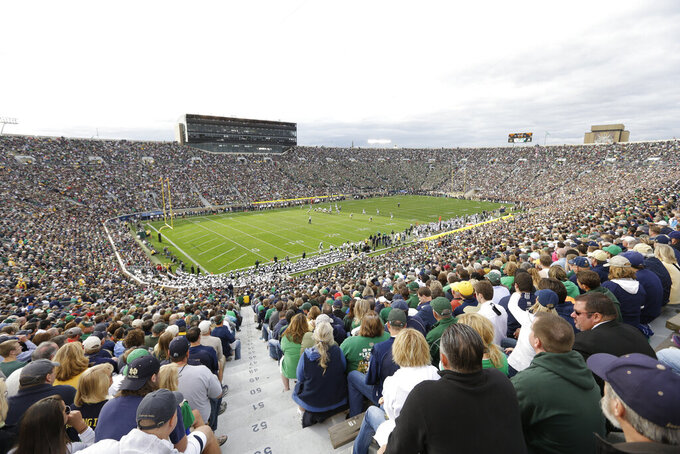 FILE - Notre Dame Stadium is shown during the second half of an NCAA college football game between Notre Dame and Michigan State in South Bend, Ind., Saturday, Sept. 21, 2013. What is most commonly referred to as major college football (aka NCAA Division I Bowl Subdivision or FBS) is compromised of 130 teams and 10 conferences. Seventy-seven of those teams are scheduled to play throughout the fall, starting at various times in September. The other 53, including the entire Big Ten and Pac-12, have postponed their seasons and are hoping to make them up later. That means no No. 2 Ohio State, No. 7 Penn State, No. 9 Oregon and six other teams that were ranked in the preseason AP Top 25. (AP Photo/Michael Conroy)

The networks that televise college football are adjusting to a smaller inventory of games because many conferences won't be playing this fall because of the coronavirus pandemic.

They also know there's no guarantee all the games still on the schedule will be played. Cases of COVID-19 have spiked on many college campuses, and conferences continue to formulate testing protocols for players and coaches.

Ilan Ben-Hanan, who oversees ESPN's four college networks, said broadcasters will need to be flexible about postponements, cancellations and other changes for the foreseeable future.

“We’ve had day-to-day and hour-to-hour discussions with conference partners. It is really just a matter of being responsive and solution-oriented. It is up to the leagues and they will do what is best,” he said. “We are a media partner. It is up to the schools and the conference if they want to stage events.

“We're excited for it to get going and will keep our fingers crossed.”

Tag Garson, a senior vice president at Wasserman Sports, said the biggest storyline going into the season isn't about any team or player.

“With all the twists and turns, the season itself is the story. My primary hope is we can go through it without any issues,” he said. “What is distributed is likely to change from week to week.”

Some other news about how the networks are handling college football this season:

With the Southeastern and Atlantic Coast conferences electing to play this fall, ESPN is able to fill most of its Saturday windows and has enough inventory to disperse to ABC, ESPN, ESPN2, ESPNU and the conference networks.

The only window that ESPN is still trying to figure out is late Saturday, since the Pac-12 is not playing. BYU might be a possibility if ESPN wanted a live late Saturday game, but its matchups are not appealing.

“There are less games overall but we are in good shape for the most part,” said Ben-Hanan, who oversees ACC Network, ESPNU, Longhorn Network and SEC Network.

Ben-Hanan said discussions are ongoing about how the bowl schedule might look as well as any possible adjustments to the College Football Playoff.

CBS has stuck to a reliable formula for picking its SEC game of the week — make sure either LSU or Alabama is one of the teams.

CBS has selected games for six of the first eight weeks and only one of them doesn't feature the Tigers or Crimson Tide. Each school will have at least three appearances, including Nov. 14 when they play each other.

With the Big Ten and Pac-12 not playing this fall, Fox's Saturday “Big Noon Kickoff” could be renamed “Big 12 Kickoff” since all of the network's announced games so far are from the Big 12. Fox has the first pick of Big 12 games this year until the conference reverts to ESPN in 2021.

If Fox was hoping to fill spots from the Group of Five conferences that haven't postponed their games, the network is out of luck. The American Athletic and Sun Belt conferences have deals with ESPN while Conference USA's is with CBS.

LUCK OF THE IRISH

Notre Dame becoming a full member of ACC football for at least this season is an unexpected benefit for NBC, which is marking 30 seasons of televising Fighting Irish home games.

NBC gets an Oct. 10 game against Florida State as well as Dec. 5 against Syracuse. The marquee game on the Irish schedule even before the pandemic was Clemson coming to Notre Dame Stadium.