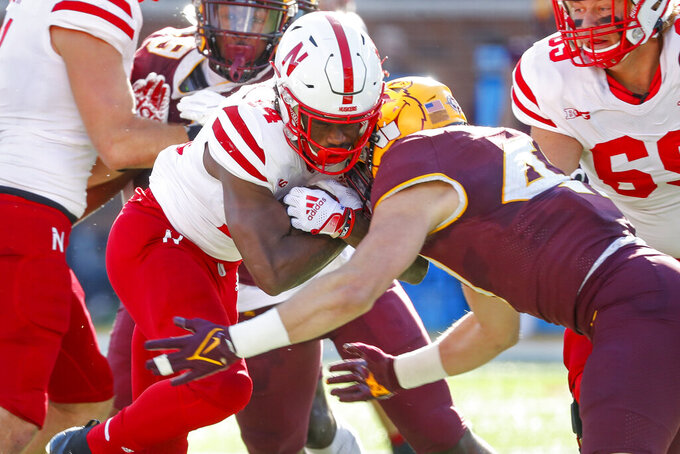 MINNEAPOLIS (AP) — The thousand-mile distance from Big Ten country to South Texas where Jack Gibbens grew up was never too far for a budding linebacker to dream of one day playing in the thick of throwback, pound-it-on-the-ground football.

Gibbens finally got his chance this season with Minnesota.

The graduate transfer from Abilene Christian has been thriving in the middle of a defense that has given the Gophers a big boost in their climb to first place in the Big Ten West Division.

“I love trying to stop the run. I love seeing teams try to run. It’s been super fun playing against it, all the way going back to spring playing against our offense every day,” said Gibbens, who is second on the team with 51 tackles. “I just love this style of football in the Big Ten.”

Minnesota is second in the conference and eighth in the FBS with an average of 93 rushing yards allowed per game, but the work has just begun.

The Gophers (6-2, 4-1) host Illinois on Saturday, when defending Chase Brown will become their top priority. Brown is third in the Big Ten in rushing, with two 200-yard games already on his resume this year. Only three other players in the FBS have done that in 2021.

New coach Bret Bielema is back where he belongs in the West Division, bringing the same smash-mouth offense he fostered at Wisconsin a decade ago. The Illini used that to win at Penn State two weeks ago in a nine-overtime slugfest.

“I’ve got a lot of ton of respect and admiration for him and how he does it," said Gophers coach P.J. Fleck, who is 3-1 against Illinois since arriving at Minnesota in 2017.

The Illini (3-6, 2-4), like the Gophers this season, lean on an experienced offensive line. They like their blockers so much they even rolled out a seven-lineman package against Penn State.

The Gophers have a confident group, too, having clearly moved past the mess their run defense was in 2020. Gibbens and Mariano Sori-Marin have solidified the linebacker spots. The defensive line is as deep as it's been in years, with Clemson transfer Nyles Pinckney playing a vital role at tackle.

“Every week, it gets harder to win football games as the season goes on. For us to get complacent, in my mind it would just be ridiculous, so we're always coaching to get better,” defensive coordinator Joe Rossi said.

The Gophers led the division at this time two years ago, too, when they beat Penn State to stay undefeated before losing at Iowa, winning at Northwestern and losing to Wisconsin to watch the Badgers get the conference championship game berth.

Quarterback Tanner Morgan, one of several starters from the 2019 team, mentioned those losses as a lesson for the Gophers entering this final stretch. This time, they start November against Illinois and travel to Indiana between the game at Iowa and the finale against Wisconsin.

“If you think ahead or look back at what you’ve done or anything like that, you have just left the door open for teams to beat you,” Morgan said.

Illinois quarterback Brandon Peters, who lost the starting job and regained it when Art Sitkowski broke his arm against Penn State, went 14 for 19 for 190 yards and two touchdowns last week against Rutgers. Bielema had a candid conversation with the sixth-year player prior to the game.

"I said, ‘If you want to play and continue to even think about playing beyond here, this is it,’” Bielema said. “'You’ve either got to do it, or it’s not going to get done. So let’s let it all hang out.'”

The Gophers are down to two healthy scholarship players at running back, freshmen Mar'Keise Irving and Ky Thomas, after three season-ending injuries and one departure via the transfer portal. Both Irving and Thomas have topped the 100-yard mark in each of the last two games, but the depth at the position remains precarious.

Enter Derik LeCaptain, a backup linebacker and special teams ace who joined the program as a walk-on in 2019 and was awarded a scholarship during preseason camp. LeCaptain had 5,199 career rushing yards at Southern Door High School in Wisconsin, so his experience made him a natural choice for the position switch. LeCaptain had a 24-yard touchdown run last week against Northwestern, prompting the Minnesota sideline to erupt with joy.

“Derek LeCaptain is just one of the best guys you’ll ever meet," Gibbens said. "He deserves everything he gets. You see how hard he works, and then it pays off on Saturdays. It’s like the perfect example of when you do the right things all the time.”