Duggan and No. 4 TCU chasing playoff at No. 18 Texas 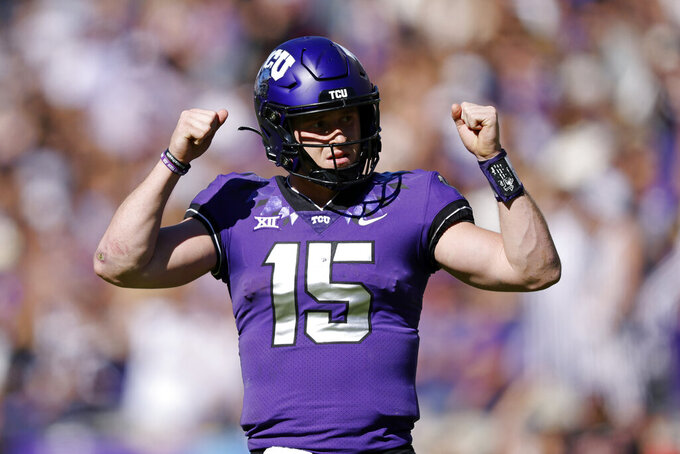 TCU quarterback Max Duggan (15) reacts after TCU made a first down against Texas Tech during the second half of an NCAA college football game Saturday, Nov. 5, 2022, in Fort Worth, Texas. (AP Photo/Ron Jenkins)

TCU and quarterback Max Duggan are chasing the College Football Playoff in coach Sonny Dykes' first season with the Horned Frogs and a win guarantees them berth in the Big 12 title game. A Texas win puts the Longhorns in good position for the league title game.

Duggan vs Texas linebacker Jaylon Ford. Duggan has come into his own as a passer this season, but his threat as a runner capable of breaking off huge gains will test the defense on almost every play. Ford leads the Big 12 in tackling and will be the key to keeping Duggan in check on the ground.

TCU: Wide receiver and kick returner Derius Davis. His two punt returns for touchdowns this season, including one last week against Texas Tech, make him the TCU career record holder with five. He's also caught five touchdown passes this season and could be Duggan's favorite target if wide receiver Quentin Johnston is still struggling with an ankle injury.

Texas: Bijan Robinson may be the most elusive runner in college football. He carried 30 times and topped 200 yards against Kansas State a week ago. If he can shoulder a similar load against the Horned Frogs, it will be key to Texas' chance of winning.

Robinson has 1,129 yards rushing and 12 TDs. TCU's Kendre Miller has 1,009 yards and 12 scores ... Texas has scored only three points in the second half of each of the last two games. ... TCU is 9-0 for the first time since 2010 when the Horned Frogs finished 13-0 and won the Rose Bowl ... TCU's four wins over ranked opponents is second nationally, trailing only Tennessee's five ... TCU cornerback Tre-Vius Hodges-Tomlinson has forced turnovers in three consecutive games.