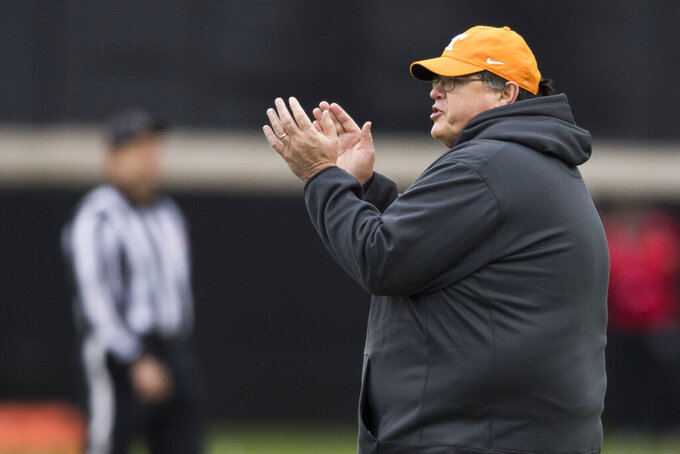 In this Thursday, March 7, 2019 photo, Tennessee offensive coordinator Jim Chaney instructs his players during Vol's opening spring NCAA college football practice in Knoxville, Tenn. Tennessee is opening spring practice with its fourth offensive coordinator in as many seasons as it tries to rejuvenate an attack that ranked last in the Southeastern Conference in yards per game the last two years. (Caitie McMekin/Knoxville News Sentinel via AP)

Chaney was Georgia's offensive coordinator and Pruitt was Alabama's defensive coordinator in 2017 when the Crimson Tide edged the Bulldogs 26-23 in a College Football Playoff championship game that went to overtime. They're working together now as Chaney tries to rejuvenate Tennessee's offense in the second season of Pruitt's head coaching tenure.

"He figures out who his best players are and finds ways to get them the ball," Pruitt said. "I think he's a very good evaluator, and coaching against him, he's very hard to defend."

Tennessee's offense recently has been known for its instability and ineffectiveness. The Volunteers have ranked last in the SEC in yards per game each of the last two years, and Chaney is the team's fourth offensive coordinator in as many seasons.

"He's been able to tell us the X's and O's to his offense," quarterback Jarrett Guarantano said of Chaney. "There's not very much different between last year and this year, just a lot of different verbiage that everybody has to get accustomed to."

Tennessee signed Chaney to a three-year contract worth a total of $4.8 million after 2018 offensive coordinator Tyson Helton left to take over Western Kentucky's program. Chaney will make $1.5 million this season, which is more than any college offensive coordinator received last year, according to USA Today's coaching salary database .

Chaney's versatility has been an asset throughout his career.

He coordinated Purdue's offense when quarterback Drew Brees led the nation in total offense in 2000. He was at Tennessee when Tyler Bray threw for 3,612 yards and worked at Pittsburgh when quarterback Nathan Peterman developed into an NFL draft pick.

Chaney's offenses at Arkansas and Georgia were more run-oriented. Chaney's Georgia offenses led the SEC in rushing each of the last two seasons.

"He's done it a bunch of different ways and has had a bunch of success in this league, which I think is important," Pruitt said. "Unless you've coached in this league against some of these guys that you're going to go against, it takes a little while to get used to what they're going to do on defense."

Because Chaney's offenses have shown different traits at his various stops, it lends some mystery to the approach he might take at Tennessee.

Chaney hasn't been made available to the media in the two months since Tennessee announced his hire, though he did say at a Signing Day fan celebration in Knoxville last month that he's more committed than ever to having a physical offense. Tennessee players didn't offer many specifics on Chaney's scheme on Friday.

"There's a lot more control for the quarterback," Guarantano said. "Of course I like that. I think it's very effective."

Guarantano has been Tennessee's starting quarterback since the midway point of the 2017 season and will lead an experienced offense.

While they've played plenty of games, they haven't experienced much success lately. Chaney is trying to change that as he instructs players eager to put the last couple of seasons behind them.

"We're focused on the present," offensive lineman Ryan Johnson said. "You can't look back on the past because we're a new team. We're not last year. We're not the year before that. We're this team. We're the team in 2019."