With expansion on hold, College Football Playoff settles in 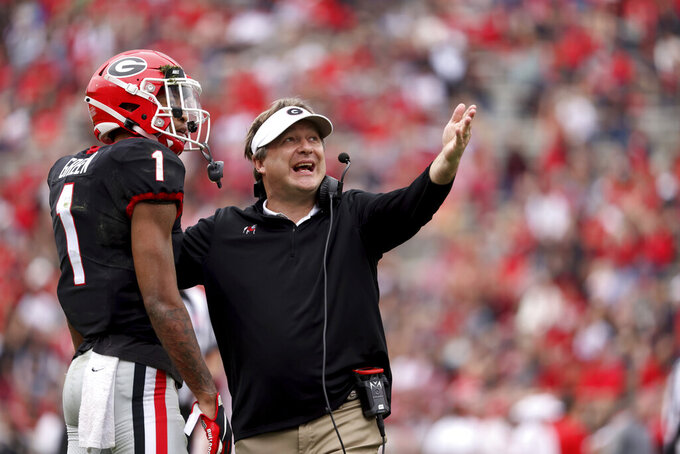 The playoff is likely to stick with the current four-team format through the end of its contract. It has no plans to engage players on name, image and likeness rights. And its leaders do not expect the Rose Bowl will be dislodged from its traditional early-afternoon time slot on New Year’s Day should expansion happen.

Bill Hancock, executive director of the CFP, said he does not believe major changes are coming any time soon after a proposal to expand to a 12-team playoff was abandoned in February.

“We knew it was a long shot to expand in this 12-year contract because everybody had a veto. But we thought we would take a look at it and make an effort. So now we’re going to be focused on a new format starting in ’26-’27, whatever that may be. But in the meantime, we have four more years of this, what’s really been a great event,” Hancock said at an event marking the countdown to the 2023 national championship game.

The plan introduced in June 2021 would have featured the six highest-ranked conference champions and six at-large teams chosen by a selection committee. But it quickly became clear getting the unanimous support needed to change the current contract would be difficult.

There were doubts if 12 teams was the right number, if Power Five conference champions should be guaranteed spots in the field, and if it made financial sense to expand without waiting for an open bidding process in a competitive landscape for broadcast and streaming rights, all against the backdrop of the July 2021 announcement that Texas and Oklahoma would leave the Big 12 to join the Southeastern Conference.

Hancock does not believe the decisions of the Longhorns and Sooners played a significant role in scuttling the proposal.

“I didn’t hear any talk about that in the meetings of the commissioners. We all knew it happened, of course, but I can’t speculate about how important that was in the process,” Hancock said. “I will say this, I think, but for the pandemic, we would have an expanded field now. If we had been able to get this done in the summer of 2019, 2020, I think we’d have an expansion before the end of the contract.”

Realignment wasn’t the only shakeup to the sport. Another is the newfound ability of college players and high school recruits to profit on their visibility.

Given the increased number of players choosing to sit out bowl games to avoid injury ahead of the NFL draft, the prospect of organizers paying players to ensure participation has been floated as a potential avenue to protect ticket sales, sponsorships and ratings.

Hancock said the CFP will not pursue that route.

“There was some talk at bowls about it, but none of it came to fruition,” he said. “I think the jury’s out. Jury’s out on everything about NIL.”

As for the Granddaddy of Them All, its hold on a prime viewing window on Jan. 1 would not have been changed by expansion.

“We didn’t really get that far, but the working group proposal was for every bowl to have two quarterfinals and then a semifinal, so you have a three-year cycle. And I thought that one made a lot of sense,” Hancock said. “But we didn’t get far enough to be talking turkey with any bowls or conferences about the actual format.”

The Rose Bowl provided the CFP and its predecessor, the Bowl Championship Series, with several memorable games, including Vince Young’s legendary performance to lead Texas over Southern California in 2006, Jameis Winston’s last-second touchdown pass to give Florida State a title in 2014, and Georgia’s thrilling double-overtime win over Oklahoma in a 2018 CFP semifinal.

Hancock hopes for more of the same at SoFi Stadium next year.

“Postseason football started in LA,” Hancock said. “And here we are, kind of full circle, so we’re delighted to be here.”