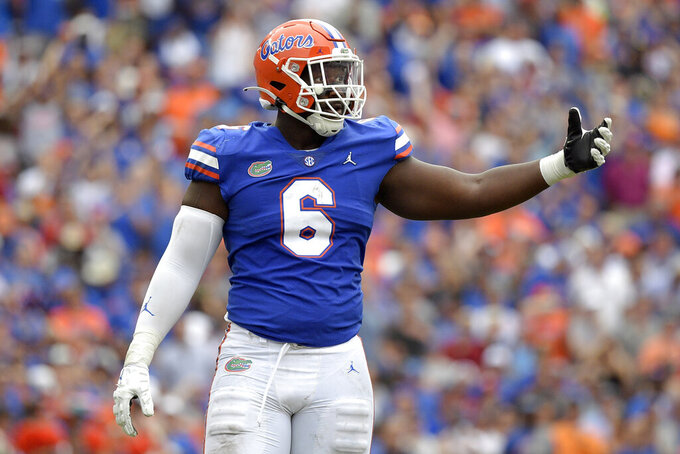 FIEL - Florida defensive lineman Zachary Carter (6) encourages fans during the second half of an NCAA college football game against Alabama, on Sept. 18, 2021, in Gainesville, Fla. Carter is opting out of the team’s bowl game to begin preparing for the NFL draft. He made his announcement on social media Friday, Dec. 10, 2021, thanking coaches from two regimes, fans, teammates and relatives (AP Photo/Phelan M. Ebenhack, File)

GAINESVILLE, Fla. (AP) — Florida defensive end Zach Carter is opting out of the team’s bowl game to begin preparing for the NFL draft.

The Gators (6-6) will play UCF (8-4) in the Gasparilla Bowl on Dec. 23 in Tampa. It would have been another homecoming for Carter, who grew up not too far from Raymond James Stadium. Carter and the Gators played South Florida in that stadium in September.

Instead, he won’t risk injury before performing for NFL coaches, general managers and scouts at the Senior Bowl in Mobile, Alabama, in early February.

The fifth-year senior led the Gators with 11 1/2 tackles for loss, including eight sacks, this season. He also had 32 tackles and one forced fumble. He finished his college career with 107 tackles, including 28 1/2 for loss and 17 1/2 sacks.

Carter is unlikely to be the last Florida player to opt out of the bowl game being playing with a lame-duck coaching staff. The Gators also will be without leading receiver Jacob Copeland, who entered the transfer portal earlier this week.

In other news Friday, Florida hired Darnell Stapleton as the team’s offensive line coach. Stapleton, who won the 2009 Super Bowl as an offensive lineman with the Pittsburgh Steelers, spent last season with new Gators coach Billy Napier at Louisiana-Lafayette.