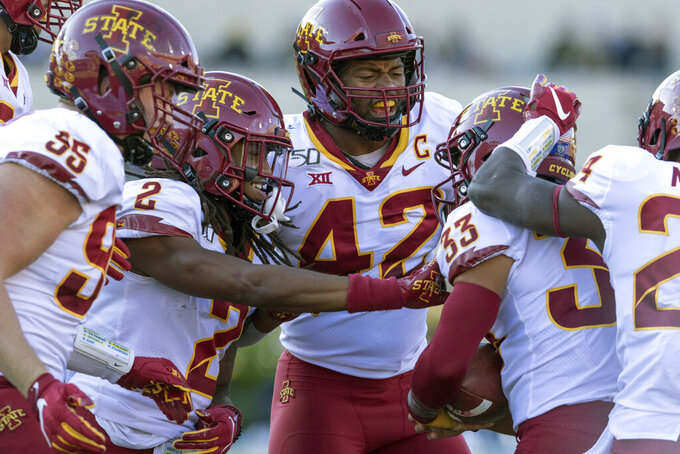 Iowa State wide defensive back Datrone Young (2) and linebacker Marcel Spears Jr. (42) celebrate with defensive back Braxton Lewis (33) after he recovered a fumble during the first half of an NCAA college football game against West Virginia, Saturday, Oct. 12, 2019, in Morgantown, W.Va. (AP Photo/Raymond Thompson) 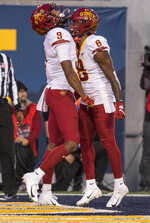 MORGANTOWN, W.Va. (AP) — Breece Hall may have given Iowa State the dependable option at running back the Cyclones have been looking for since star David Montgomery left.

The freshman rushed for 132 yards and scored three touchdowns to lead Iowa State to a 38-14 victory over West Virginia on Saturday night in a game in which the Mountaineers lost quarterback Austin Kendall to injury.

Hall scored on a pair of 1-yard runs in the second and fourth quarters and also had a 12-yard TD in the third quarter.

"He certainly did a great job tonight and hopefully he can build on that," Iowa State coach Matt Campbell said. "I expect that he would."

The 205-pound Hall is the third different running back to lead the Cyclones (4-2, 2-1 Big 12) in rushing this season and the first to eclipse 100 yards. Quarterback Brock Purdy had 102 yards a week ago against TCU.

Johnnie Lang started Saturday's game and had four carries for 11 yards before giving way to Hall, who entered the game fifth on the team with 84 rushing yards on 18 carries.

"Breece just brings a lot to the table," said Iowa State wide receiver La'Michael Pettway. "He's physical. He can move. I like his feet. He's got a quick twitch and he's smart. With Breece just being a freshman he still has a lot to learn so that can be scary."

Kendall was hit hard while attempting a pass during West Virginia's first series. He did not return and was replaced by backup Jack Allison.

West Virginia coach Neal Brown said Kendall appeared to sustain a chest injury and will know more by early in the week.

"It's not an arm or shoulder injury," Brown said.

Purdy threw for one TD and ran for another for Iowa State, who held the Mountaineers (3-3, 1-2) scoreless in the second half. The Cyclones scored 17 points in the fourth quarter to pull away.

"I'm not disappointed in our effort. I thought our guys were ready to play," Brown said. "We just ran out of gas. They are one of the top offenses in the country and I thought we did a pretty good job holding them in check, 372 yards."

Iowa State: Hall's performance will help the Cyclones take the running load off of Purdy, who entered the game with the most carries on the team.

West Virginia: The Mountaineers were limited to 190 yards of offense. Allison had one good series but couldn't generate enough offense to keep up with Purdy. Allison finished 18 of 24 for 140 yards with one touchdown pass and an interception.

"I think it's tough when a backup quarterback has to come into a game and play," Brown said. "In college football, you don't get as many reps. I thought under the circumstances he did an OK job."

The Mountaineers will be without cornerback Hakeem Bailey for most of next weekend's game after the senior was called for targeting for a hit on wide receiver Tarique Milton early in the third quarter.

Iowa State's offense had two three-and-outs all season entering the game but failed to get a first down on two of its first three series Saturday. On the second one, West Virginia's Tykee Smith caught a deflected pass from Purdy and went 19 yards for the opening touchdown.

West Virginia's Nicktroy Fortune broke up a second-quarter pass that would have forced an Iowa State punt near midfield. Instead, linebacker VanDarius Cowan was called for using his hands to the face on the play, giving the Cyclones a first down at the 34. Purdy later converted a fourth-down run and then scored on a 2-yard run to put Iowa State ahead 14-7.

West Virginia plays at No. 6 Oklahoma next Saturday.