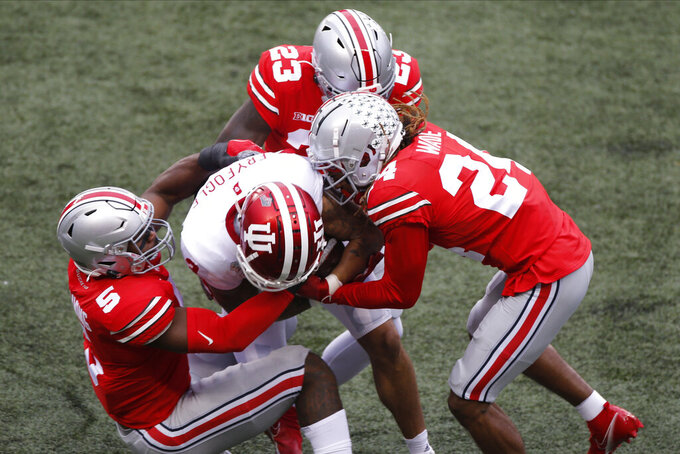 Now, the senior from Mississippi is suddenly making some noise. He is the Hoosiers' top target and his eye-popping performances are turning heads across the nation.

“That was always the goal, to get to a point like this," Fryfogle said Tuesday. “It took time, just getting better every year. I feel like I’m playing at the top of my game right now, but I’ve got to keep getting better and better."

He had seven catches for a career-high 142 yards against Michigan — all in the first half. He topped that with an 11-catch, 200-yard day at Michigan State. Last week, against one of the nation's best cornerbacks in Shaun Wade, he torched No. 3 Ohio State with seven receptions for 218 yards and three scores.

Fryfogle is the first receiver in Big Ten history to post consecutive 200-yard games, the first Indiana receiver with two 200-yard games in his career and earned his second straight conference offensive player of the week honor.

But it's not just numbers and accolades that put Fryfogle in this spot; it's his ability to ward off defenders with his 6-foot-2, 214-pound body.

“The ability to fight for the football, make contested catches, just be big and strong and run after catch," coach Tom Allen said, explaining Fryfogle's strengths. “There’s a lot of hand-fighting that goes on and he’s just got so much body control. Some guys have a knack for that and he does and they had a hard time stopping him."

Fryfogle's skill set and Michael Penix Jr.’s penchant for accurately finding receivers in traffic have made this one of the most dangerous combinations in college football.

It's also a big reason the Hoosiers (4-1) are one win away from securing a second straight winning record in conference play — something that's only been done four times in school history, most recently in 1987-88. If Indiana beats Maryland (2-1) this weekend, the Hoosiers also are likely to remain in the Top 25 for a sixth consecutive week, tying the school record from 1987.

And even if the Terrapins try to take away Fryfogle, the Hoosiers know Philyor and Hendershot are more than capable of explosive plays.

“The No. 1 job as a receiver is to get open and when you do that good quarterbacks have a tendency to find you," offensive coordinator Nick Sheridan said. “Obviously, Fry's had a great run the last couple weeks and we're going to need him to continue to do that. And Whop's been Whop with the big catches and the big conversions. I think Mike trusts all the guys and will throw to the first open receiver."

Lately, it's been the soft-spoken Fryfogle leading the pack in a conference full of talented receivers.

The list includes Rashod Bateman of Minnesota and Chris Olave of Ohio State, potential first-round picks in April. Rondale Moore of Purdue might join them after returning from a hamstring injury Friday night. Terrapins receiver Dontay Demus Jr. hopes to enter that conversation, too, and Moore's teammate, David Bell, could be one of the first receivers selected in the 2022 draft.

Right now, though, Bell (39) and Bateman (36) are the only Big Ten players with more catches than Fryfogle (31). And Fryfogle leads the league in yards (642) and TD receptions (seven).

“What I've learned from them is how to practice, really,” he said, referring to Fryfogle and Philyor. “Those guys always come out and practice hard. Practices were a big difference for me when I came here because I found out you’ve always got to work, you've always got to run hard."

Now, after three amazing performances, Fryfogle is no longer a secret or a complementary piece. He's a playmaker.

“It’s exciting to see my work finally being noticed," he said. “But I've still got to keep working and getting better because (last week's performance) doesn't matter. It's over. I've just got to keep getting better.”