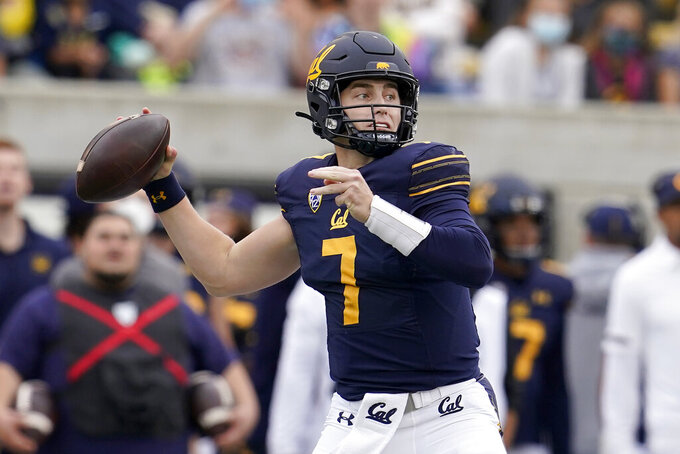 The Golden Bears (2-5, 1-3 Pac-12 Conference) made several big plays offensively to go with a solid afternoon from their defense and special teams while snapping a three-game losing streak.

“It feels really good,” Cal coach Justin Wilcox said. “Lot of smiling faces in the locker room right now. I want them to enjoy this. It’s been a difficult stretch. Winning feels good but also we don’t want it to be the highlight of the season.”

Dario Longhetto made a career-best four field goals, including a 50-yarder as time expired in the first half.

The Bears defense added six sacks and held the Buffaloes to 104 yards of offense.

“I was just doing my job within the scheme,” Hicks said. “I had a lot of opportunities to make plays. Can I do it next week is the question? That’s what my mind is on.”

The Bears, off to their worst start since Wilcox took over in 2017, scored on their first five possessions and led 23-3 at halftime.

Garbers had a pair of touchdown throws in the first half, including a perfectly thrown 24-yard lob to freshman tight end Keleki Latu over tight coverage by Colorado linebacker Quinn Perry.

Cal pushed its lead to 17 when Garbers ran a play-fake and connected with wide open Gavin Reinwald for a 31-yard score.

“Chase has done a good job,” Wilcox said. “Had some really timely runs today. I thought he made some really clean reads both in the run game, keeping it, and in the pass game making decisions.”

The Bears slowed down and were held to three points in the second half.

“Played well enough to win but could be better,” Garbers said. “We came our really firing in the first half but we have to go finish the game early in the second half and put it away.”

Colorado never got anything going.

Buffaloes quarterback Brendon Lewis was held to 69 yards passing while the running game managed only 35 yards.

“That wasn’t the type of game I was expecting at all,” Colorado coach Karl Dorrell said. “We have a lot of work to do. We have to change things up to be more productive and more efficient and more effective with some other semblance of things. It was not a very good performance today.”

Colorado: A week after shutting out Arizona gave the Buffaloes hope; they regressed in a big way. Colorado couldn’t get anything going offensively and made Garbers way too comfortable in the pocket defensively. With No. 10 Oregon up next, the climb out of hole will get much tougher for Dorrell’s squad.

California: The Bears finally looked like many expected while getting their first win this season over an FBS school. Garbers showed excellent poise and decision-making while Cal’s defense smothered most everything Colorado tried.