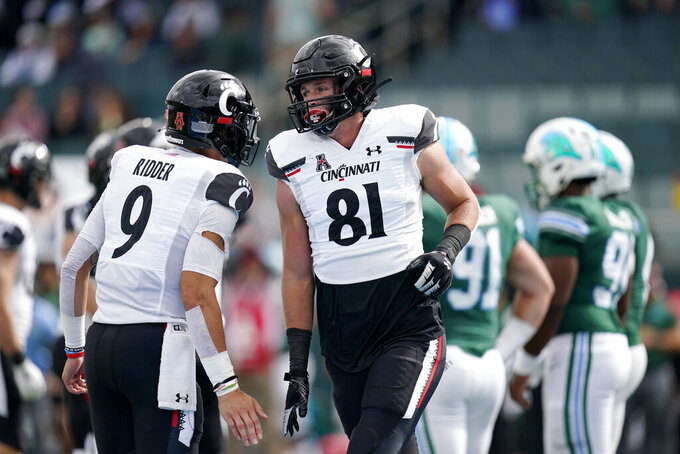 Georgia, Alabama, Michigan State and Oregon will start the College Football Playoff race in prime position at the top of the selection committee's rankings.

Unbeaten Cincinnati is going to need some help to make history as the first team from outside the Power Five conferences to reach college football's final four.

At sixth, the unbeaten Bearcats of the American Athletic Conference have the best ranking ever in the selection committee’s Top 25 for a non-Power Five team, but still sit behind three teams (second-ranked Alabama, fourth-ranked Oregon and fifth-ranked Ohio State) that have already been beaten.

Committee chairman Gary Barta, who is also Iowa's athletic director, said the committee was impressed with Cincinnati’s victory at tenth-ranked Notre Dame (7-1), but not so much by the rest of the Bearcats' schedule.

He cited closer-than-expected wins against Navy (2-6) and Tulane (1-7) over the past two weeks.

“I guess you could say same old, same old," he said. “I just want out teams to have a fair chance.”

Only once in the seven-year history of the CFP have the four teams in the committee's initial ranking made the final four. That was last season.

This season, Georgia (8-0) was an obvious No. 1. Barta said Alabama (7-1) was a comfortable No. 2 for the 13-member panel, despite the Crimson Tide's close loss at Texas A&M in early October.

“It was a strong consensus,” Barta said.

Oregon got the nod over Ohio State in the four spot by virtue of beating the Buckeyes on the road in the second week of the season.

Cincinnati set the previous high ranking from a team from the so-called Group of Five conferences last season at No. 7, but the Bearcats never moved up. In fact, they were passed while completing an unbeaten regular season and were eighth in the final rankings that set the playoff field.

Aresco pointed out that this season Cincinnati has a more convincing victory against Indiana than third-ranked Michigan State and that Oregon, in addition to losing to Stanford (3-5), needed a late goal-line stand to beat California (3-5) and the Ducks' margin of victory against winless Arizona (22) was similar to Cincinnati's against Tulane (19).

“Is this a P5 invitational?” Aresco said. “Is there a preference for P5 wins and losses?”

The committee had a similar critique of Oklahoma and Wake Forest as it did Cincinnati, dinging the Sooners and Demon Deacons for a lack of a “signature" victory and some close games against teams with losing records.

"Those close calls are seen by the committee just like everybody else,” Bart said of Oklahoma.

The Sooners seem to be positioned to boost that resume down the stretch.

Oklahoma State was 11th and Baylor was 12th. Oklahoma still has both of those Big 12 rivals to play along with Iowa State (5-3). Oklahoma could also see one of those teams again in the Big 12 title game, if it gets there.

Wake Forest has one team ranked in the committee's Top 25, No. 19 North Carolina State, still left to play.

“Here's another self-fulfilling prophecy,” Aresco said. “Then you can say Cincinnati beat SMU, but that's not a ranked team.”

The final rankings of this season will come Dec. 5, the day after conference championships are played.

The first four in that Top 25 will meet in the CFP national semifinals, scheduled for Dec 31 at the Orange Bowl in South Florida and Cotton Bowl in North Texas.

The College Football Playoff national championship game will be held Jan. 10 in Indianapolis.