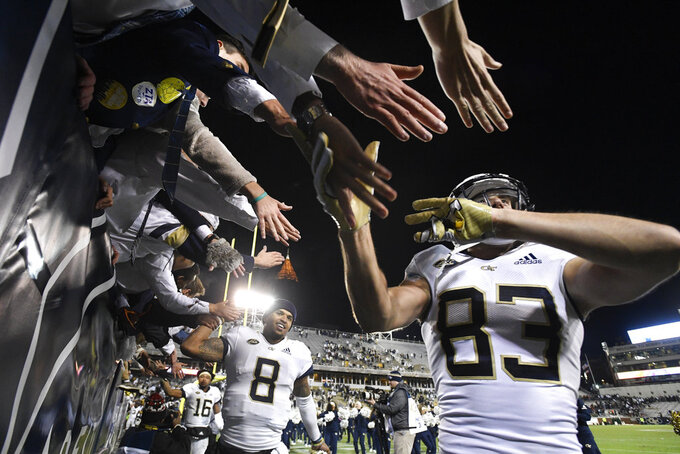 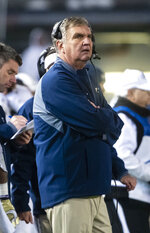 ATLANTA (AP) — Georgia Tech was headed for a dismal season.

The Yellow Jackets have ripped off three straight victories, locked up a bowl trip and could clinch a winning season with a victory Saturday over Virginia.

"It's like I always tell the team, 'It's never as good or as bad as it seems,'" coach Paul Johnson said Tuesday. "Very few teams in America are going to show up every week and blow people out. There's too much parity in college football these days. If you play clean and make plays, you've got a chance to be successful. If you don't, that other thing happens."

Georgia Tech (6-4, 4-3 Atlantic Coast Conference) started the season 1-3, which included blowing a 10-point lead in the fourth quarter at South Florida and a rout at the hands of No. 2 Clemson . When the Yellow Jackets lost at home to lowly Duke , a third losing season in four years seemed likely and many wondered if Johnson's long tenure on the Flats was winding down.

But they bounced back with a dominating 49-28 win at Virginia Tech — without completing a pass, no less — before pulling out nail-biting wins over North Carolina and Miami the last two weeks.

"This league is so balanced," Johnson said. "Other than Clemson, everybody is pretty similar. If you don't play well, you can lose. That's kind of the way it is for everybody."

Pittsburgh, which handed Georgia Tech its other loss early in the season , is on the cusp of wrapping up the ACC Coastal Division title, so that goal is pretty much out of reach.

But a victory over Virginia would give the Yellow Jackets a winning mark in the conference for the first time since 2014. Plus, it would improve their position within the ACC bowl hierarchy.

The seniors, who helped to hold the team together when things looked bleak, are eager to keep the turnaround going.

"We got to six. Cool. We get to go to a bowl game," receiver Brad Stewart said. "But at the end of the day, we're still hungry. We want more."

Always a run-dominated team out of the triple-option, the Yellow Jackets have essentially shut down any pretense of a passing game over these last three games, attempting only seven passes and completing five for 177 yards.

Meanwhile, they've averaged nearly 386 yards on the ground during that span, a big reason they've dominated time of possession with an average of 37:45 per game.

"If the other team doesn't have the ball," Johnson said with a smile, "it's hard to score."

Virginia will certainly need to do a better job against the triple-option than it did in last season's Military Bowl, when Navy ran all over the Cavaliers in a 49-7 rout . The Midshipmen failed to complete their only pass attempt but rushed for 452 yards, a game plan that Georgia Tech would certainly like to duplicate.

"It's unique. You don't see it week in and week out," Virginia linebacker Jordan Mack said. "It's one week, and you've got to abandon everything you know essentially and just focus in on the offense."

The Cavaliers did a better job when they faced Georgia Tech last season in Charlottesville. They limited the Jackets to 220 yards rushing, picked off a pair of passes and pulled out a 40-36 victory on a 27-yard touchdown pass with 1:22 remaining .

With that win, Virginia locked up its first bowl appearance in six years.

"That was very satisfying," defensive lineman Eli Hanback said. "It was a hard-fought game, it was a rainy game, it was tough. It was very sweet, at the end of the game, having won. It's a good memory."