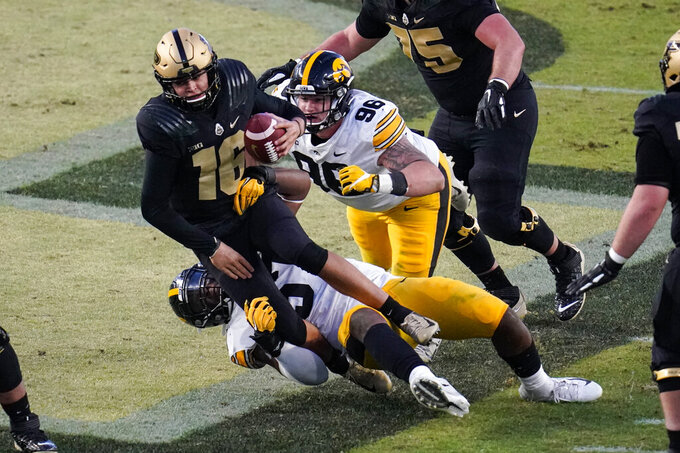 FILE - In this Oct. 24, 2020, file photo, Purdue quarterback Aidan O'Connell (16) is sacked by Iowa defensive linemen Jack Heflin (96) and Chauncey Golston (57) during the fourth quarter of an NCAA college football game in West Lafayette, Ind. Heflin is right where he always wanted to be. Heflin has turned his childhood aspirations into reality, suiting up this season for the No. 17 Hawkeyes after four years at Northern Illinois. The 22-year-old Heflin has 21 tackles and a sack playing a key role in anchoring one of the nation’s top defenses, which takes on Missouri in the Music City Bowl next week. (AP Photo/Michael Conroy, File)

The Prophetstown, Illinois, native has turned his childhood aspirations into reality, suiting up this season for the No. 17 Hawkeys after four years at Northern Illinois.

“It’s lived up to all the hype, in my head, that I had growing up as a kid,” the 22-year-old Heflin said as the Hawkeyes prepared a season-ending showdown with Missouri in the Music City Bowl next Wednesday.

Growing up a Iowa fan, Heflin didn’t receive much attention from the Hawkeyes or any Power Five program. He attended a number of recruiting camps around the Midwest, including a few in Iowa City, but flew under the radar.

“He would go up against guys that were top recruits in the one-on-ones and he would do really well,” Heflin’s mother, Judi Breitbach, said. “A lot of times, he would hold his own or beat him. (The coaches) would coach up the (other) kid on how he could have done better to beat Jack. ... He was from such a small school and always had a chip on his shoulder.”

Northern Illinois was the only school to show palpable interest in Heflin, and he opted to walk on as a freshman in 2016.

Just days before his first game, Heflin injured his shoulder and underwent surgery for a torn labrum, ending his first season of college football.

“He was actually taken off the roster at Northern Illinois,” Breitbach said. “It was a pretty dark time for him.”

Heflin red-shirted that season and eventually made his way back into the Northern Illinois defensive line mix. He earned a scholarship at the end of fall camp, heading into his second season.

From there, he never looked back.

Heflin racked up 72 tackles (17.5 for a loss), nine sacks, and three forced fumbles over the next three seasons and, as a senior in 2019, earned All-America honors from Pro Football Focus.

Heflin wanted to use his final season of eligibility to boost his stock in the NFL draft. So, he entered the transfer portal after graduating.

He immediately began fielding interest from a number of schools, including Iowa.

The Hawkeyes reached out early. Iowa defensive line coach Kelvin Bell messaged Heflin, and from there, a connection grew.

“I was really excited when Iowa started pursuing me,” Heflin said. “That’s where my interest was leaning toward the whole time in the portal.”

The Hawkeyes were frontrunners, but the Heflin wanted to take his time.

So, the lineman, his girlfriend, and his golden retriever traveled to Colorado Springs — out of phone range — to contemplate his options.

Heflin returned from Colorado with a decision.

“It was pretty clear to him,” his mother said. “Iowa was where he got the chills when he thought about playing there, where he got butterflies in his stomach.”

Heflin announced his decision to transfer to Iowa in May, and he turned heads from the start.

“He’s like a 45-year-old guy that lives next to you, the kind of neighbor you want to visit with,” Iowa football head coach Kirk Ferentz said. “He’s awesome. He’s brought good life to our team and he’s a pretty tough, hard-minded guy.”

“Jack doesn’t know a stranger,” Breitbach said. “He can talk to anybody. He just has that personality. I thought it was well said by Kirk, because I can relate to that quite a bit. He’s always been able to talk to just about everybody. He truly cares about people.”

Heflin's become a favorite among his teammates.

“You always have to be on your toes — that’s the kind of guy Jack is,” Iowa defensive lineman Daviyon Nixon said. “He’s a fun-loving guy. I love to be around him. He’s always out there enthusiastic. ... He’s definitely a character.”

Through eight games this season, Heflin has 21 tackles (3.5 for loss) and a sack, playing a key role in anchoring one of the nation’s top defenses.

Statistics aside, Heflin’s achieved a dream he chased since childhood.

“I don’t think I could have written a script that has been any better for him,” his mother said.