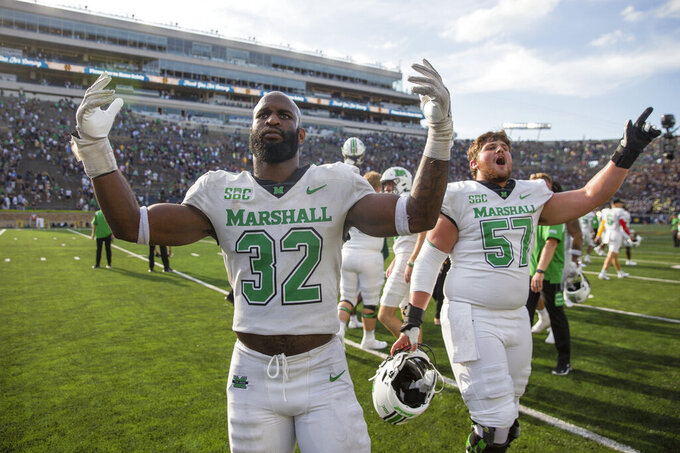 HUNTINGTON, W.Va. (AP) — The path to one of Marshall's greatest victories was forged through scooping up transfer portal talent, magic tricks, and a second-year coach's belief that a Sun Belt Conference team can be as good as any opponent, especially a storied giant like Notre Dame.

Droves of fans, some of them crying, greeted Marshall’s team bus upon its return to campus in Huntington on Saturday night. Huff responded to 350 text messages. New Marshall President Brad Smith, a former CEO of software company Intuit, was congratulated by executives from across Silicon Valley.

It was Marshall's second win over a Top 10 team. The other also came on the road, in 2013 against No. 6 Kansas State.

Gone was Notre Dame’s streak of 80 straight weeks in The Associated Press poll and 42 consecutive wins over unranked opponents.

“Phenomenal weekend,” Huff said. “Not only for our football team and our players, but for the state of West Virginia and this community, and everybody that bleeds green. I think it also gives college football its shot, a boost, of energy. I think this is what college football is all about."

And it's still going. The local newspaper, The Herald-Dispatch, is busy selling reprints of Sunday’s front page containing a photo with the headline, “Shocker in South Bend.”

Page views on Marshall’s website around the time of the game were more than triple that of a typical Saturday. Traffic on the university's admissions pages on Saturday and Monday both were higher than at any point in the previous few months.

After a visit Monday from Gov. Jim Justice, himself a Marshall graduate, it was time to go back to work.

“We’ve obviously got to move on,” quarterback Henry Colombi said. “But it’s awesome to be able to reflect on what we did. Our community’s still buzzing about it and I think it’s going to be like that for a while, when you have a big win like that in school history. So I think it’s awesome.”

On Tuesday, there was more electricity when running back Rasheen Ali returned to Marshall’s practice. One of the nation’s top freshmen a year ago when he rushed for 1,400 yards, Ali went on an undisclosed personal leave of absence from the team prior to the season.

It’s uncertain whether Ali will play when Marshall (2-0) travels to Bowling Green (0-2) on Saturday. When he does, it will add to the load of concerns for opposing defenses. His replacement, Khalan Laborn, is ninth in the FBS with 265 yards, nearly matching his entire production when he was at Florida State.

Other transfers who have paid immediate dividends include Colombi, who played at Texas Tech the past two years and is leading the nation in completion percentage at 85.1%.

Huff is in his first head coaching job and he’s the first Black head football coach at Marshall. To know Huff is to understand that when he's not in business mode on the field, he's lighthearted. His laugh and smile are often and infectious. He celebrates great efforts by his players.

During the final day of summer camp, Huff brought in magician Carl Michael for a team bonding event. To say it was a hit would be an understatement.

“I’ve never seen anything like it,” Colombi said. “I’m still thinking about it to this day.”

Michael also had Huff dance for his players.

"He can dance better than me," Colombi said.

It turns out the session was a good segue into the season.

“If they had had that energy on Saturday that they had for the magic show, we would have won by 50,” Huff said. “No question.”

In reality, that exhibition had a higher purpose.

Huff was associate head coach and running backs coach under Nick Saban at Alabama. His hiring at Marshall in January 2021 came only a few weeks after the Crimson Tide routed Ohio State for the national championship.

After being hired, Huff visited a Huntington cemetery where a memorial honors the victims of the worst disaster in U.S. sports history. That gave him an understanding of the community’s unwavering commitment and passion for a football program that almost went away when a 1970 plane crash killed 75 players, coaches, supporters and the flight crew.

Smith, the university's president who grew up close to the crash site in nearby Kenova, referred to a quote by Dallas Cowboys Hall of Fame coach Tom Landry in describing Huff: “A coach is someone who tells you what you don’t want to hear, who has you see what you don’t want to see, so you can be who you have always known you could be.”

“The way I see him address our community, our university, and every student-athlete as he sees who you are and who you’re capable of being, he makes it his life’s purpose to connect those two,” Smith said.

Huff teaches his players to stay even-keeled and prepare the same way no matter who the opponent. Asked how Marshall can guard against a potential letdown at Bowling Green, Huff's response was direct and simple.

“Is their field 100 yards by 53-and-a-third? Do they have goal posts?” Huff responded. “If they got those two things, we’ll be all right.”