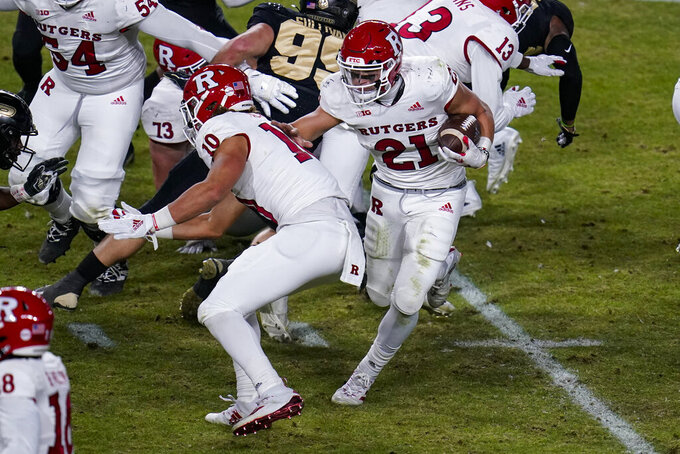 PISCATAWAY, N.J. (AP) — Greg Schiano isn't surprised Rutgers has not developed a rivalry with another team in its five-plus years in the Big Ten Conference.

Looking at a map, one would have thought the Scarlet Knights might have generated something with either Maryland or Penn State. It just hasn't happened although things might be changing.

Rutgers (2-4, 2-4) is improving quickly in Schiano's second stint as coach and has a shot at beating Penn State (1-5, 1-5) on Saturday when the schools meet at SHI Stadium for a noon start.

Rutgers is coming off a win at Purdue after blowing leads against Illinois and Michigan the previous two games. The Nittany Lions are struggling in a season shortened by the coronavirus pandemic. They got their first win last week against Michigan.

Penn State will look for its second straight win this week against a team it has beaten in all six Big Ten Conference games. It has a 28-2 all-time record against Rutgers and has won the last 13. The Scarlet Knights' last win was in 1988 when Schiano was a high school assistant coach at Ramapo in New Jersey.

“As far as a rival goes, look, we’re not Penn State’s rival, and that’s clear,” Schiano said. “And the reason is we haven’t given them a reason to make us their rival. When when rivalries develop, it’s because there’s great contests on the field. There’s great recruiting battles. And that’s why so many rivalries are regional, because you recruit the same kids and you have great games and it grows over time.”

“It’s huge,” he said. "It’s been a while since we won a game. I forgot how good winning feels and I think everyone tasted that on Saturday for the first time in a while too and kind of put a little pep in their step and gave them a little energy.”

The Nittany Lions' defense is going to have to be ready to face three quarterbacks this week.

Rutgers starter Noah Vedral had an injury last week and did not play against Purdue. Schiano did not disclose his injury but said the transfer from Nebraska is making progress.

Art Sitkowski started in the win over the Boilermakers but Johnny Langan got most of the snaps in the second half. Sitkowski is more of a pocket passer. Langan runs more than he throws. Vedral can do either.

Penn State had just three cornerbacks available last week, and coach James Franklin was worried about how the trio would hold up against Michigan’s speed on the outside.

Joey Porter Jr., Daequan Hardy and Marquis Wilson did just fine. They helped hold Michigan to a season-worst 112 passing yards without the services of teammates Keaton Ellis and starter Tariq Castro-Fields, who missed his third game in a row.

Franklin anticipates at least one cornerback will be cleared to return by Saturday. Meanwhile, a number of the team’s safeties have been taking reps at cornerback as a contingency.

The stout, hard-charging runner handled a majority of carries last week and had 134 yards and a touchdown.

“We needed the ability to be able to grind things out,” Franklin said. “We haven’t had that, at this point, the ability to make the free guy miss and go 80. We need to do that more. But we at least need to be able to break tackles and fall forward and stay on schedule as much as we possibly can. He’s been able to do that.”

Rutgers is the most improved offensive team in the league. Compared to 2019, it is averaging increases of 17.5 points, 96.2 yards in total offense, including 94.2 yards more in passing offense.

The Scarlet Knights have scored 185 points in six games. Their average of 30.8 points is on pace for its best scoring season in the Big Ten since joining the league in 2014. The previous high is 21.3 points in 2015. They scored 51 posted in nine conference games last season, and 159 in all 12.

Rutgers has been skipping the second quarter in games this season. It has been outscored 81-27, with No. 3 Ohio State doing the biggest damage with a 28-0 effort in Columbus in the quarter.

“We’ve talked about it a lot actually,” Schiano said. “You know, second quarter is like a dirty word around here lately. So we have to we have to figure out how we can perform better.”