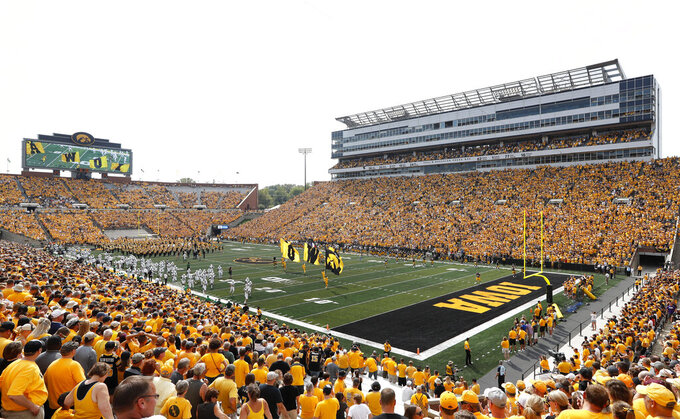 FILE - Fans cheer before an NCAA college football game between Iowa and North Texas at Kinnick Stadium in Iowa City, Iowa, in this Saturday, Sept. 16, 2017, file photo. Iowa will expand alcohol sales at Kinnick Stadium and its other athletic venues as part of a pilot program beginning this fall, the athletic department announced Thursday, June 10, 2021. (AP Photo/Charlie Neibergall, File)

IOWA CITY, Iowa (AP) — Iowa will expand alcohol sales at Kinnick Stadium and its other athletic venues as part of a pilot program beginning this fall, the athletic department announced Thursday.

Beer and wine will be available for purchase throughout Kinnick Stadium with the exception of areas immediately adjacent to the student section. Carver-Hawkeye Arena, Duane Banks Field (baseball) and Bob Pearl Field (softball) will also be included in the pilot program.

“We have been working with our campus partners on this for some time now and we are committed to maintaining a safe and enjoyable game day environment," athletic director Gary Barta said. “While there is an opportunity for increased revenue, this decision was based on enhancing the fan experience and providing an additional amenity to our fans.”

Thirty percent of net alcohol sales will be directed toward research-based initiatives developed and supported by an Iowa committee formed in 2009 to decrease high-risk drinking. Barta said the pilot program will be reviewed at the end of the 2021-22 academic year.

Parking lot hours at Kinnick Stadium will be modified as part of the program. Beginning this fall, parking lots will open no more than six hours prior to kickoff and no earlier than 6 a.m. Parking on the night prior to football games will be limited to RVs only.

Seven other Big Ten schools, and about half the schools in Power Five conferences, sell beer, wine or both in public areas at home football games.