K-State welcomes back QBs Thompson, Howard to lead this year 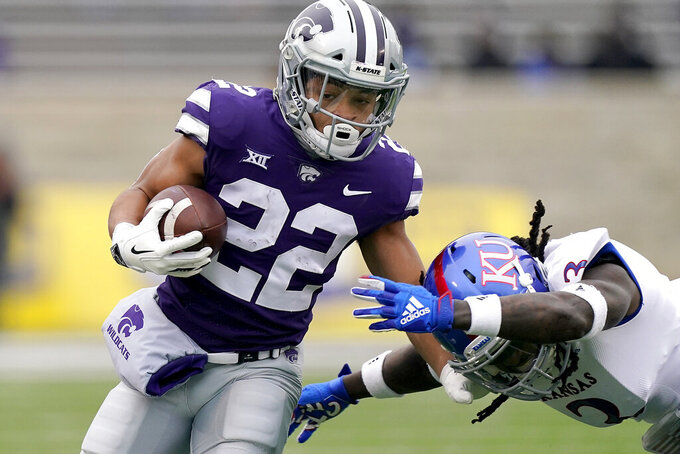 MANHATTAN, Kan. (AP) — When Skylar Thompson was hurt last season, and Kansas State was forced to strip the redshirt from freshman Will Howard and throw him into the fire, it may have been the moment that set the Wildcats up for big things this season.

Thompson is back for his sixth year in the program, thanks to the extra year of eligibility granted to players amid the pandemic, and he's healthy again after season-ending shoulder surgery.

And his understudy, Howard, returns with his freshman eligibility still intact but seven Big 12 starts now on his resume.

Good luck finding another Power Five program with more experience at the game's most important position.

“I definitely think we've moved through install a little bit quicker than the past couple of years because of that,” said Thompson, who has accounted for more than 6,000 yards of total offense and more than 50 touchdowns in his career.

“In a way,” he said, “it was still a little challenging because it's a lot being thrown at us all at once. Our defense is installing so much, so the looks are changing. But we're to the point now where everything's installed and it's time to go play football.”

It's also time for Kansas State to get back on track.

The Wildcats stalled in their second season under Chris Klieman, finishing 4-6. After an early win over Oklahoma, they lost their last five games, including an embarrassing 45-0 loss to Iowa State and a loss to Texas in which they allowed 69 points.

“Whenever you go through tough things as a person, as a group, as a team — as a society — you should hope that you come out stronger on the other side,” assistant head coach Van Malone said. “When you look at what we’ve done since January in terms of leadership, we as a staff can be no more excited because our guys have really grown.”

They've also been bolstered by some important arrivals.

While the Wildcats return most of their skill players from last season, including the talented Deuce Vaughn in the backfield, they also welcomed the arrival of Illinois transfer Daniel Imatorbhebhe at tight end.

“We think we're much better than we've been here, at least in the last wo years,” Klieman said. “People understand the offense, understand the defense better. The fact that we’ve had everybody here for the winter, summer and start of fall, we’re in much better shape in that respect, but we'll se if we can put all these things together.”

Thompson is the clear-cut starter at quarterback, but Klieman hasn't written off using Howard at times this season. He threw for 1,178 yards with eight touchdowns and 10 picks after being pressed into duty last season.

Vaughn led the Wildcats in rushing and receiving last season, and was among just three players nationally with at least 600 yards on the ground and 400 through the air, giving Thompson and Co. a budding star in their ground-based offense.

“We have to find creative ways to move him around,” Klieman said, “but the only way we're going to be able to give it to him 15 to 25 times is by other people making big plays. We feel better about those other guys as playmakers, too.”

CATCH ME IF YOU CAN

Malik Knowles and Phillip Brooks have taken the majority of snaps at wide receiver in practice, but the wild card in the pass game could be the return of Chabastin Taylor. He was the Wildcats' leader at the position last season but had surgery this past December, and only recently has he been getting up to speed in practice.

The Wildcats lost two-time All-Big 12 defensive end Wyatt Hubert up front, along with Elijah Sullivan and Justin Hughes at the linebacker position. Finding replacements for them will be crucial to the Wildcats improving on defense this year.

“We have depth there,” Klieman said. “I don’t know if we have the person that’s going to make those splash plays like Wyatt did, but we’re going to play a lot of guys.”

Kansas State irked many fans by moving its home opener Sept. 4 against Stanford to AT&T Stadium in Arlington, Texas, for national TV exposure. The schedule is front-loaded with a trip to Oklahoma State followed by home games against No. 2 Oklahoma and No. 7 Iowa State, so the Wildcats should know by October where they stand.