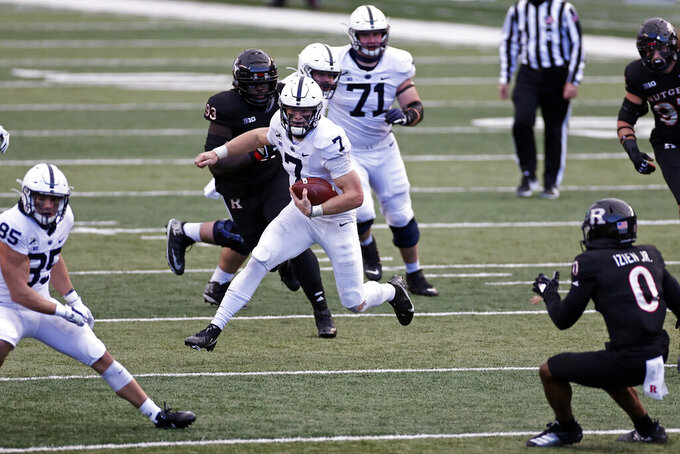 FILE - Penn State quarterback Will Levis (7) rushes against Rutgers during the second half of an NCAA college football game in Piscataway, N.,J., in this Saturday, Dec. 5, 2020, file photo. Kentucky coach Mark Stoops believes his Wildcats can do some damage in the Southeastern Conference this year after persevering through an emotional season. The NCAA transfer portal has helped, with the Wildcats adding receiver Wan’Dale Robinson (Nebraska), quarterback Will Levis (Penn State) and inside linebacker Jacquez Jones (Mississippi) among six newcomers. (AP Photo/Adam Hunger, File)

LEXINGTON, Ky. (AP) — Kentucky coach Mark Stoops believes his Wildcats can do some damage in the Southeastern Conference this year after persevering through an emotional season.

The Wildcats return 14 starters from a 5-6 squad that struggled during a grueling 10-game Southeastern Conference schedule before regrouping to close with a TaxSlayer Gator Bowl victory over North Carolina State. The Wildcats also had to cope with the passing of longtime offensive line coach John Schlarman, who died from cancer. Linebacker Chris Oats was sidelined with an undisclosed medical condition and Kentucky had to navigate coronavirus issues like many schools.

But the Wildcats still found a way to capture their third consecutive postseason win, which provided a needed morale boost they aim to build on.

The NCAA transfer portal has helped, with the Wildcats adding receiver Wan’Dale Robinson (Nebraska), quarterback Will Levis (Penn State) and inside linebacker Jacquez Jones (Mississippi) among six newcomers. Nine players took advantage of getting an extra year of eligibility, giving Kentucky the pieces it needs to contend in the SEC East.

“I feel good about where we’re at,” said coach Mark Stoops, who begins his ninth season, second only to Alabama’s Nick Saban (15) in SEC coaching seniority.

“I think we have a very good team, and we have some things in place. We’re constantly learning, constantly growing, and we’re getting better.”

At the very least, the Wildcats figure to pass more after throwing for just 1,336 yards last season. They will also have a new leader behind center with quarterback Terry Wilson’s transfer to New Mexico after going 17-8 with two bowl wins as Kentucky’s starter.

That QB competition has built offensive anticipation and added to Kentucky’s enthusiasm, which took a lot of effort in 2020.

“One of the biggest things he wants is just pinpoint accuracy with everything we’re doing,” offensive tackle Darian Kinnard said of Coen’s system. “Everything has a purpose and a reason, and it sets up a lot of stuff for a lot of the game.

“We’ve just got to keep sticking to it, keep working and master this new offense.”

Some other things to watch as the Wildcats seek their sixth consecutive postseason appearance:

Stoops named Levis as the starter on Sunday, quickly ending what had been a three-man contest between Levis and holdovers Joey Gatewood and Beau Allen. Gatewood will transfer while Allen will be the backup.

The Wildcats return five starters on defense from a stingy, opportunistic unit that ranked in the top six nationally in interceptions and turnovers. Kentucky still has holes to fill though Jacquez Jones, a senior, brings experience after starting 19 of 33 contests with 182 tackles at Ole Miss.

Kentucky landed an in-state recruit, albeit three years later that the Wildcats had planned, Wide receiver/returner Wan’Dale Robinson returned home after two seasons at Nebraska. The Frankfort, Kentucky, native caught 91 passes for 914 yards while spending time at running back. Robinson and Josh Ali — who caught 90 catches for 846 yards and five TDs — could be big-play threats the Wildcats’ new offense.

Having five of its first seven games at home gives Kentucky plenty of chances to reach that six-win threshold for bowl eligibility. The Wildcats open SEC play this year against Missouri (Sept. 11) instead of usual foe Florida, which visits Oct. 2 with LSU next in a two-game stretch of heavyweights. The road docket includes Georgia, Mississippi State and rival Louisville.