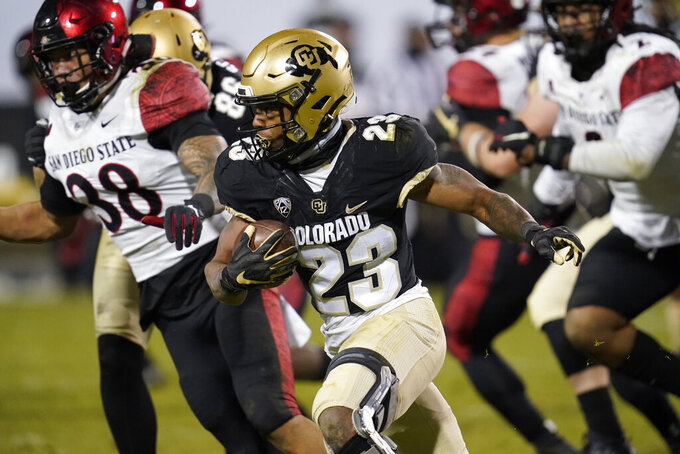 FILE - In this Nov. 28, 2020 file photo, Colorado running back Jarek Broussard, front, runs for a short gain as San Diego State linebacker Andrew Aleki pursues during the second half of an NCAA college football game in Boulder, Colo. Jarek is one of three winners of the Mayo Clinic Comeback Player of the Year Award, along with Kentucky offensive lineman Kenneth Horsey and Coastal Carolina linebacker Silas Kelly.(AP Photo/David Zalubowski, File)

Kentucky offensive lineman Kenneth Horsey is one of three winners announced Saturday of the Mayo Clinic Comeback Player of the Year Award, along with Colorado running back Jarek Broussard and Coastal Carolina linebacker Silas Kelly.

Horsey overcame a heart condition that required surgery and threatened his career to become a starter on Kentucky's offensive line.

The winners were chosen by the College Sports Information Directors of America (CoSIDA), a panel of Associated Press football writers and the Fiesta Bowl Organization.

“I could imagine this because football was one of the things that kept me motivated,” Horsey, a third-year sophomore, told AP.

Broussard, a redshirt freshman, sustained a season-ending knee injury before the 2019 season, but claimed a starting job this fall and ran for 895 yards and five touchdowns.

“He’s come a long way, from where we weren’t sure if he was going to be healthy enough to play to becoming the conference’s player of the year, a first-team All-Pac-12 performer and now one of the three comeback players of the year,” Colorado coach Karl Dorrell said. “A truly great story of perseverance.”

Kelly, a senior, returned this season from two knee surgeries and a broken hand to lead No. 9 Coastal Carolina in tackles during an 11-1 season.

"I’ve put in countless hours of work to be the teammate, player, and person that my teammates needed me to be in order to help my team in the best way that I could. I set my mind to recovering from my injury and contributing in a meaningful way,” Kelly said.

Horsey will try to help Kentucky (4-6) earn its third consecutive postseason win when the Wildcats face North Carolina State (8-3) in the TaxSlayer Bowl in Jacksonville, Florida, on Saturday. He’s part of an offensive line known as the “Big Blue Wall,” which helped the Wildcats’ rushing game rank fifth in the Southeastern Conference at 187.4 yards per game this season.

“There are many people that would have to definitely consider whether to put your body through the stress that it takes to compete at this level after going through what he went through," Kentucky coach Mark Stoops said. “We’re just very proud that he’s out here, that he’s playing.”

The game marks the latest step for the Sanford, Florida, native, who even in his comeback season faced adversity.

The 6-foot-3, 300-pound Horsey missed the last two games of the season after contracting COVID-19. He said he had only mild symptoms. He said by phone recently he's feeling fine and eager to play a bigger role in the bowl after participating on the kicking unit in last season’s Belk Bowl.

Horsey's challenges started in April 2018 when he complained of pain in his side after dinner. His parents rushed him to a hospital. An examination found a growth on one of his heart valves, resulting in open heart surgery.

The growth was outside the valve, and Horsey's heart was strong. But doctors told him his football career was over. He saw a chance to return after a long recovery.

“I didn’t have any expectations,” said Horsey, who lost 50 pounds during his ordeal. “I just knew that I was going to do whatever I could to get back on the field, even if there was even the slightest chance that I could get back on the field. I handled my business and God willing, I’m back on.”

Horsey credits his return to family, faith and physicians, Kentucky teammates and coaches gave him all the time needed to regain his strength. He redshirted during the Wildcats’ 10-3 2018 season and played in four games in 2019 before making his first college start in the season opener at Auburn.

“One of the things that motivated me was walking back out on the field, especially in an SEC environment,” Horsey said.

Horsey said he found inspiration in Kentucky offensive line coach John Schlarman, who continued working while being treated for cancer. Schlarman died in November, and the team is still mourning the former Wildcats lineman.

Schlarman’s influence has kept Horsey working through the rough days, which included a broken hand this season.

"Sometimes I just press that (surgery) scar to remind myself of the things I went through, to be grateful for everything I have and be blessed with the opportunity that I’ve been given,” Horsey said.