The Latest: TCU coach optimistic 2020 season will be played 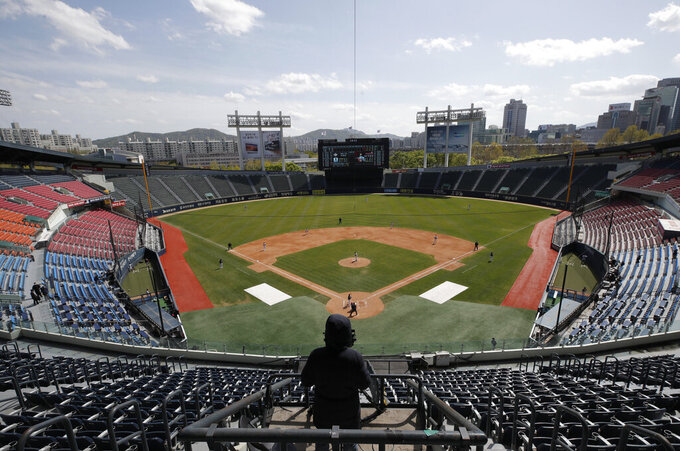 A TV cameraman films in the empty stadium as a part of precaution against the new coronavirus during the pre-season baseball game between Doosan Bears and LG Twins in Seoul, South Korea, Tuesday, April 21, 2020. South Korea's professional baseball league has decided to begin its new season on May 5, initially without fans, following a postponement over the coronavirus. (AP Photo/Lee Jin-man)

TCU coach Gary Patterson, president of the American Football Coaches Association, says his level of optimism is “very high” that there will be a 2020 college football season.

He's just not sure when it will start or how it will look.

“At some point in time, whether it’s fall or spring ... or if it’s shortened, we’re talking about five, six, seven, eight different options right now,” Patterson said during a Zoom call with media on Tuesday.

Some states, including Texas, are beginning to loosen stay-at-home restrictions amid the coronavirus pandemic, though procedures will vary in different regions of the country in the weeks and months to come.

“I think one thing’s for sure: I think it will be really hard to get 100% of everybody on the same page,” Patterson said. “So I think things will have to be done with the majority before it’s said and done.”

Louisville-based Hillerich & Bradsby Co. says in a release its Maskonic masks are reusable, water repellent and treated with a bactericide that lasts for up to 10 washes. Inspired by its Bionic gloves line, company president and CEO John Hillerich said, “this was a natural progression, particularly in a time of global crisis.” He cited the need for protective equipment in preventing the spread of COVID-19 and added that H&B has channeled its production and supply chain toward making masks for the public.

Maskonic will sell the masks online at www.maskonic.com and www.bionicgloves.com with free shipping. Partial proceeds from sales will go to Feeding America food banks. The 164-year-old company is also shipping masks to its employees.

Navy football coach Ken Niumatalolo is waiting out the coronavirus pandemic with his family in his native Hawaii.

“We were planning on being here a week, and we’ve been here two months now,” he said Tuesday.

Niumatalolo arrived for spring break at the beginning of March, and when the pandemic shutdown began he and his family decided to stay. He has a home in Hawaii and is there with his wife, his daughter and her family, and one of his two sons.

“This is a pretty bad time, but we’re OK,” he said. “It’s actually a blessing to be together.”

The 2021 PGA Championship at Kiawah Island’s Ocean Course is delaying the start of ticket sales until August.

Tickets were originally set to go on sale to those who registered online in May. Instead, PGA Championship tournament director Scott Reid said that with the world grappling with the coronavirus pandemic it was not appropriate to ask potential spectators to make purchasing decisions at this time.

The tournament said the 2021 event remains set for its May dates. This year’s PGA Championship in San Francisco was moved from its original dates next month to early August.

The Spanish government says professional athletes in the country can resume training individually next week.

The government made the announcement while revealing a four-phase plan to get the country back to normal following the coronavirus outbreak.

Prime Minister Pedro Sánchez says “basic” training for professional athletes will be permitted beginning Monday. It's the start of the first phase of the plan aimed at easing the lockdown measures that have been in place since March 14.

High-performance sports facilities will be allowed to reopen in the second phase of the plan, which will begin as early as May 11, depending on the situation in each province.

Sánchez did not say when sports competitions, such as the domestic soccer league, are expected to resume. The Spanish league has said it doesn’t plan to restart before the end of May. The league has already sent clubs a detailed protocol with safety guidelines on how to return to practice.

The Sugar Bowl Committee is donating $500,000 to several organizations in an effort to help soften the financial hardship caused by the new coronavirus in the New Orleans area.

The money will go to assist the Second Harvest Food Bank, the Greater New Orleans Foundation’s Service and Hospitality Family Assistance Fund and the Hospitality Cares Pandemic Response Fund, which is managed by United Way of Southeastern Louisiana.

“This organization’s primary mission is to generate tourism through amateur athletics,” Sugar Bowl Committee President Ralph Capitelli said Tuesday. “With the COVID-19 outbreak, we’re temporarily on hold, but that doesn’t mean we can sit on the sidelines. With this donation, our aim is to help people in need, especially those in the hospitality industry whose livelihoods have been so negatively impacted by the coronavirus.”

The Sugar Bowl was founded in 1934, partly as a response to the Great Depression, and first played on Jan. 1, 1935. It started as the marquee event in a New Orleans-area economic development initiative launching a midwinter carnival of sporting events.

The Atlantic Coast Conference will bring its men’s basketball tournament back to Greensboro, North Carolina in 2023 after this year’s tournament there was canceled near the midway point due to the coronavirus pandemic.

The league announced the move Tuesday.

The ACC is headquartered in Greensboro, which has hosted the tournament 27 times, the most of any location. Last month’s event was canceled after two days of play, with regular-season champion Florida State being presented the tournament championship trophy in accordance with league bylaws without even playing a game.

In a statement, commissioner John Swofford said returning to Greensboro in 2023 was “the right thing to do” while calling the relationship between the ACC and the city “extremely special.”

The ACC Tournament will be held in Washington next year and in Brooklyn in 2022.

Texas Tech athletic director Kirby Hocutt says the school will cut nearly $7 million from the athletic budget in the upcoming school year, including eliminating performance bonuses for himself and Red Raiders coaches.

The cuts are needed because of the economic shutdown caused by the coronavirus pandemic, and deeper cuts may be needed if college football can’t play a full season, Hocutt told A-J Media in Lubbock, Texas.

Hocutt did not say the school was cutting any jobs or sports. Most of the cuts will come from reducing administrative and operational expenses. Eliminating the bonuses for the coaches and himself will save nearly $2 million, he said.

Swin Cash and Kyle Korver are among the guests on the debut of a new NBA weekly roundtable series that will discuss how minority communities are being impacted by the coronavirus pandemic.

The roundtable will be shown on the NBA’s Twitter page. Former NBA player Caron Butler will host.

The roundtable coincides with several teams and players directing efforts to help meet the needs of those neighborhoods.

Cash was a three-time WNBA champion player and now is the vice president of basketball operations for the New Orleans Pelicans.

She says players “have really just tried to focus in on saying, ‘Look, we want to help the people that are losing their jobs, but we also know that there is a serious crisis dealing with the African-American and minority community.’”

The French government says the rest of the soccer and rugby seasons won’t be completed because of the coronavirus pandemic.

The top two divisions in French soccer both had 10 league games left to play. Rugby’s Top 14 league had reached the semifinal stage.

France is expected to end its lockdown on May 11.

The French Rugby Federation has announced a support package worth 35 million euros ($38 million) to help ease the financial concerns of its amateur clubs during the coronavirus pandemic.

Amateur rugby competitions in France were canceled for the season on March 27 after strict social measures were put in place to deal with the outbreak.

It means they will not have to pay for such things as insurance costs and license fees.

Rugby officials are waiting to see what rules the government sets out following the end of lockdown before definitively deciding if a resumption is possible in the country’s top league.

Athletes in track and field can apply for money from a $500,000 fund to help them get through the coronavirus pandemic.

World Athletics and the International Athletics Foundation have launched the fund to help athletes who have lost income because competitions are suspended.

World Athletics president Sebastian Coe says the fund will try “to help as many athletes as possible.”

It’s unclear when or if the track season can begin. Diamond League meets and the Olympics have been postponed.

Coe says the fund was the idea of 1,500-meter world record holder Hicham El Guerrouj. The Moroccan runner will be part of the team examining applications from athletes.

The end of the Argentine league soccer season is expected to be ratified by the national association executive committee.

AFA president Claudio Tapia says there will be no relegation until 2022 to ease club finances burdened by the coronavirus pandemic.

The end of player contracts on June 30 will be honored.

Boca Juniors won the title shortly before the AFA suspended all soccer on March 15.

How teams qualify for the 2021 Copa Libertadores and Copa Sudamericana is also to be resolved.

Tapia tells TNT Sports “everyone wants to play again when we can, and if we have to play in January because we couldn’t do it earlier in the year, we will.”