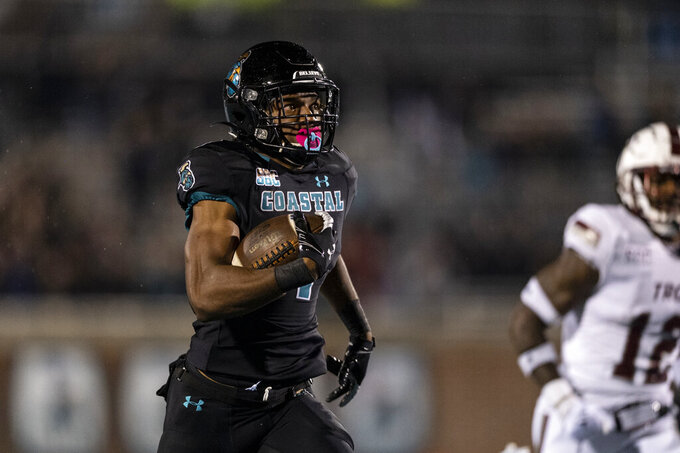 Coastal Carolina running back Braydon Bennett runs for a touchdown during the first half of the team's NCAA college football game against Troy on Thursday, Oct. 28, 2021, in Conway, S.C. (AP Photo/Matt Kelley)

Chadwell took the risk on a fake punt with about 3 minutes left and a one-score lead as No. 24 Coastal Carolina held off Troy 35-28 on Thursday night, rebounding from its first loss of the season at Appalachian State last time out.

The result was a 12-yard run for the first down by defensive tackle C.J. Brewer that kept the drive going.

“I felt like last week, from a play-calling standpoint, I got a little apprehensive,” Chadwell said. “I said, ‘Hey, this week we’re going for it.'”

The successful run on fourth-and-4 let Coastal Carolina (7-1, 3-1 Sun Belt Conference) hold the ball until the final 25 seconds on the way to their 12th straight home victory.

Grayson McCall threw for 294 yards and two touchdowns. He also ran for a third touchdown as the Chanticleers overcame a slow start to beat Troy (4-4, 2-2) for a third straight time.

“Obviously, we didn't play our best ball, but we found a way and now it's on to the next one,” McCall said.

McCall connected on scoring throws of 66 yards to Jaivon Heiligh and 71 yards to Braydon Bennett. Still, Troy (4-4, 2-2) made it a one-score game on Gunnar Watson's 18-yard touchdown pass to Tez Johnson to draw within 35-28 with 4:52 to go.

But facing fourth-and-4 on its own 31, the Chanticleers set up for a punt. Instead, they snapped the ball to Brewer, who took it around the left side for 12 yards to keep the drive going.

Troy got the ball back with 25 seconds to go on its 24. But Watson fumbled as he was sacked by Josiah Stewart and Jeffrey Gunter recovered to seal things.

Coastal Carolina came out slow, looking like a team that hadn't fully flushed its 30-27 loss at Appalachian State on Oct. 20 that had ended its undefeated start.

The Chanticleers didn't have a first down on its first two possessions — Coastal had scored on its opening drive in all its games this season — and were trailing 7-0 when McCall got going.

There was a scary moment for McCall, who entered as the nation's best in completion percentage (77.3%) coming in. He went down to a knee after taking a hit on a run, then went to the turf as he tried to jog to the sidelines.

McCall went into the medical tent for a few moments, but was back in on the Chanticleers' next series.

McCall said he was hit in the stomach. “What he had for pregame meal, he didn't have anymore,” Chadwell said.

Heiligh had five catches for 116 yards, his fifth game this season reaching the century mark. Chanticleers tailback Shermari Jones had touchdown runs of four and 54 yards.

Kimani Vidal finished with a game-high 142 yards rushing for the Trojans.

Troy coach Chip Lindsey said his team missed some opportunities early that might've made a difference. “We were still fighting there at the end,” he said. “We just didn't make enough plays.”

Troy: The Trojans put a couple of scares into Coastal, but didn't have the staying power on defense to keep the potent Chants off the scoreboard.

Coastal Carolina: The Chanticleers will need help if they hope to reach the Sun Belt Conference championship game. Any chance to keep that dream alive means they can't slip up against teams they're favored to beat — and they should be the favorites in their final four games.

Troy linebacker Carlton Martial had a game-high 14 tackles. It was his third game with double-digit stops and second in a row after notching 18 against Texas State two weeks ago. “He becomes an All-American every time he plays us,” Chadwell quipped.

Troy: Starts a three-game homestand against South Alabama on Nov. 6.