Mobile Shea Patterson learning on the run for No. 6 Michigan 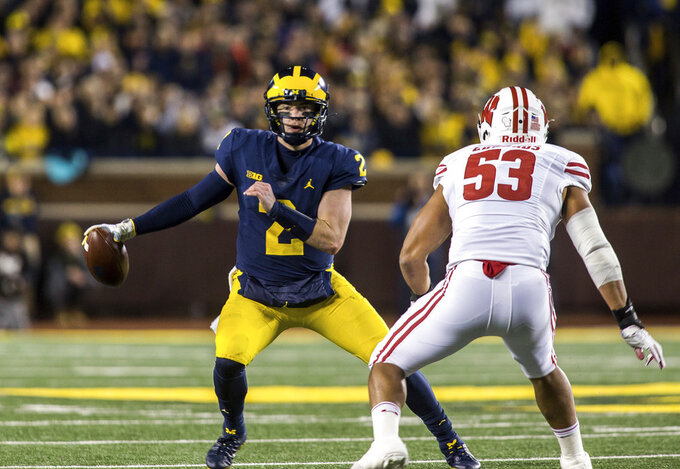 ANN ARBOR, Mich. (AP) — Shea Patterson is learning on the run at Michigan.

The quarterback has become a running threat for the sixth-ranked Wolverines in his first season under center in Ann Arbor. His mobility and desire to extend plays has gotten him into trouble at times. He ran for a career-high 90 yards, including an 81-yard run , and a score in last week's lopsided win against then-No. 15 Wisconsin. He also lost 23 yards on three sacks, possibly costing his team some points it didn't end up needing in a 38-13 win over the Badgers.

"Kind of grew up around the rivalry," said Patterson, who lived in Toledo, Ohio, before his family moved to Texas when he was going into high school. "I know how important of a game it is for both Michigan State and us."

When Patterson makes his debut in the rivalry at Spartan Stadium, he's hoping to make all the right moves and decisions.

"I threw a couple away last game — that's progression," he said this week with his left, non-throwing hand wrapped in ice after needing five stitches to close a cut. "But just understanding the situation, field position, and not getting us out of field goal range: I could have done a better job against Wisconsin of doing that. Just being a manager in the offense. That's one thing I'm focusing on right now."

The Spartans will be coming at Patterson with the nation's top-ranked defense against the run, but a unit that is just No. 117 out of 129 teams against the pass. They have controlled the series over the last decade, winning eight of 10, but acknowledge Patterson is a difference-maker for Michigan.

"Obviously they have got a highly rated quarterback over there and I don't think they have had one past couple years since I've been here," Michigan State linebacker Joe Bachie said. "There's big talk about him."

Michigan created a buzz in the offseason, as it often has done under Jim Harbaugh, when Patterson transferred from Ole Miss. The NCAA allowed him to play this season, instead of sitting out a year, and he was billed as the quarterback the Wolverines have been lacking . He has pretty much lived up to the hype.

"One of the things he brings that maybe they didn't have in the past is ability to run and make plays with his legs," Spartans safety Khari Willis said.

Patterson can throw, too.

He has completed nearly 69 percent of his passes, ranking second in the Big Ten and his passer efficiency rating is among the conference leaders. He has accounted for 11 touchdowns and two interceptions since throwing an interception and losing a fumble in the opening-season loss at Notre Dame.

After losing a total of 10 yards rushing over the first four games, he has gained 131 yards on the ground with some plays designed for him to carry the ball after making it look like he's handing off to a running back.

"He finds another thing to be really good at every single week," Harbaugh said. "This past week, his running ability. The ball-handling, with carrying out the fakes and the decision-making, ball security. He does a great job of taking care of the football."

It has also helped Patterson to have a running game and an offensive line he can depend on. Karan Higdon has run for 114.5 yards a game and scored six times on the ground, ranking third in the Big Ten in both categories. Chris Evans returned from a leg injury to play against the Badgers and Tru Wilson has provided depth at the position.

Patterson has often had time to drop back and pass.

"Couldn't be more happy for our line and our run game," Patterson said. "Really adds another dimension to our offense and our team as a whole. Just seeing the progression of the line every single week, it's really good to see and it's a lot of fun. I had all night back there. Took a couple sacks, took us out of field goal range. I shouldn't have done that."