Navy tries to salvage rough season with win against Army 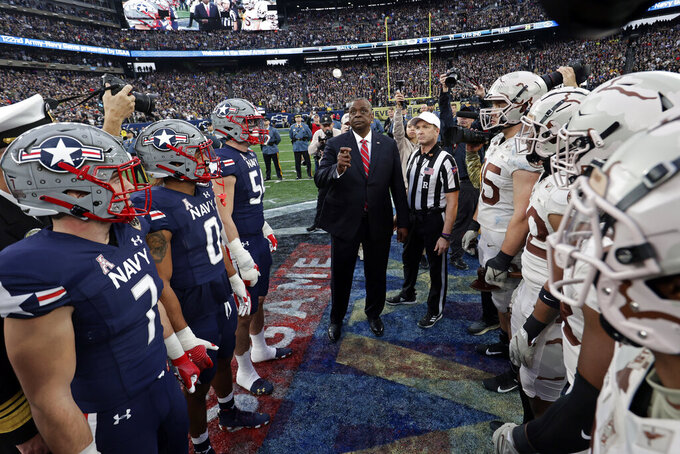 FILE - Defense Secretary Lloyd Austin flips the coin before the first half of an NCAA college football game between Army and Navy on Saturday, Dec. 11, 2021, in East Rutherford, N.J. Army and Navy play on Saturday, Dec. 10, 2022, for the 123rd time, the 90th time in Philadelphia and 14th time at Lincoln Financial Field, the home of the NFL-leading Philadelphia Eagles.(AP Photo/Adam Hunger, FILE)

PHILADELPHIA (AP) — Navy spent most of coach Ken Niumatalolo’s tenure anchored to the Commander-in-Chief’s Trophy and always stuck it to Army on that last Saturday of games before bowl season.

Oh, Navy was part of bowl season, too. The Midshipmen played in enough bowls to make Power Five teams jealous and all that success made Niumatalolo a hot candidate for solid job openings.

The last three seasons, though, have been rough sailing for the Mids. Navy will wrap up a third straight losing season under Niumatalolo and -- even worse -- has lost four of the last six games against the Black Knights (5-6). The CIC Trophy awarded to the winner of the three games played among Army, Navy and Air Force hasn’t been docked in Annapolis since 2019.

The annual rivalry game -- played Saturday for the 123rd time - once meant pure revelry for Navy. Now the Mids need a win to salvage a season that included losses against teams as varied as Delaware and Notre Dame. The Mids (4-7) did finish .500 in the American Athletic Conference and beat No. 17 UCF without completing a pass last month.

“Ken’s done a great job for us,” Gladchuk said. “He is a great representative of the academy, his relationship with his players is extraordinary. But he’s under the same type of analysis we all are. Winning is important to morale. Winning is important to the expectations of the institution. We have a tremendous investment in our programs at large, including football. With that comes the expectation of success.”

In other words, is Niumatalolo on the hot seat?

“I’m not saying anything about that,” Gladchuk said.

Is next season a make-or-break one for him?

“We all feel a little bit of the heat when it’s a down year,” Gladchuk added. “But in the final analysis, the buck stops with the head coach. We’re looking for a win against Army.”

Niumatalolo, the winningest coach in the Army-Navy series, once spurned BYU and rejected other overtures to stay at Navy. He noted some of the November losses were painfully close, such as a three-point loss at Notre Dame and a 20-10 loss at Cincinnati that showed the Mids had made progress since a slow start.

“I see us in November, which was probably the toughest stretch since I’ve been here, and we played well in all those games,” Niumatalolo said. “I saw us get better. That’s why I’m encouraged. We’re not far off.”

And if there’s a coaching change, odds are it won’t be Niumatalolo’s call.

“Why leave? I love this school,” he said. “I recognized that when I went to those places and looked at them, I had the best job. I go there and I come back and I’m like, why would I want to leave? I love Annapolis, I love the kids that I coach, I love the people that I work with. I am so grateful that I stayed.”

Army and Navy will play for the 123rd time, the 90th time in Philadelphia and 14th time at Lincoln Financial Field, the home of the Philadelphia Eagles.

Navy leads the series 62-53-7 and is 11-2 at the Linc against the Black Knights. The Mids are 2½-point favorites, per FanDuel Sportsbook.

“I didn’t serve in the military. Maybe one of the great regrets of my life,” Army coach Jeff Monken said. “In my own way, this is an opportunity to serve those men and women in uniform.”

Army has 11 players with at least 100 rushing yards this season and is averaging 304.4 rushing yards per game, second best in the country.

Navy has won two games this season without completing a pass are 8-1 under Niumatalolo when it doesn’t throw. Navy does have a school-record 32 sacks this season and 10 in the last two games.

The Army-Navy game is as synonymous with Philadelphia as the Liberty Bell. The series, though, is hitting the road starting with next season’s game in Foxboro, Massachusetts. The 2024 game is at FedEx Field in Landover, Maryland; 2025 is at M&T Bank Stadium in Baltimore; and 2026 is at MetLife Stadium, the New Jersey home of the Jets and Giants just west of New York City. The game returns to Philly in 2027.

“I think this game is special no matter where it’s played,” Monken said. “It wouldn’t matter if we played this game in a parking lot. There’s so much emotion and so much at stake for those at competing. It’s a great game.”