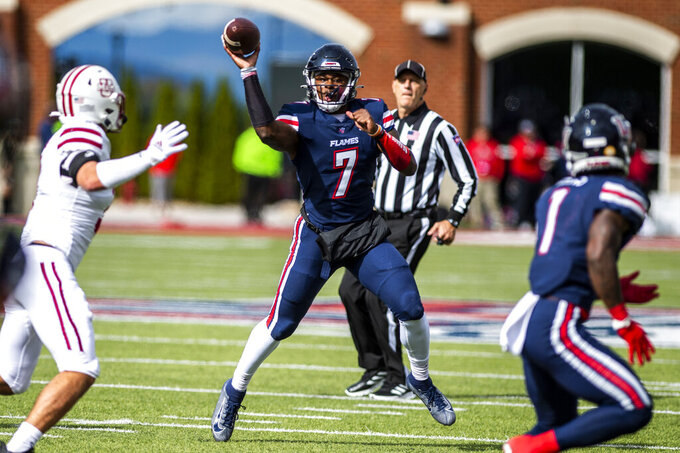 Malik Willis refused to settle for a backup role.

Liberty's biggest star and potentially the first quarterback selected in April's NFL draft left Auburn after two seasons of mop-up duty and transferred to play for coach Hugh Freeze in Lynchburg, Virginia. It was one of the best decisions of Willis' football career, maybe even of his life.

Now, he might never have to vie for playing time again.

Once relegated to watching Bo Nix and Joey Gatewood compete for a starting spot, Willis is widely regarded among the best pro QB prospects in college this season. He is the latest top prospect The Associated Press is spotlighting each week during the season with help from Reese’s Senior Bowl executive director and former NFL scout Jim Nagy.

Willis, a senior from Atlanta, gets a chance to raise his profile when the Flames (7-2) play at No. 15 Ole Miss (6-2) on Saturday. It's a matchup that features Willis and another top QB prospect, Rebels junior Matt Corral.

“He is our asset on offense," said Freeze, who is returning to Oxford for the first time since Ole Miss fired him in 2017. "He's got to play really well. He's got to take care of the football. But he gives you a fighting chance to score points offensively along with our other kids.

"You've got to have a trigger guy if you're going to beat a team whose depth chart is deeper and probably more talented than yours. ... It'll hinge on how well he plays and how well I coach him."

Willis is a 6-foot-1, 225-pound speedster with a huge arm. He has completed 66.7% of his passes for 1,986 yards, with 21 touchdowns and six interceptions. He also leads the team with 684 yards rushing and nine scores. One downside: he has been sacked 29 times in nine games.

Tied 35-all at Virginia Tech last November, Willis completed an 8-yard pass on a fourth-and-6 play to set up a 51-yard field goal that gave the Flames their biggest victory in program history. He threw for 217 yards and three TDs and ran for 108 yards and another score in the stunning upset by the 15-point underdogs.

“He’s got good to very good arm strength,” Nagy said. “It's hard to get him on the ground. He’s improved in his discipline, sticking with his reads. He’s scrambling around to make a play down the field; he’s not looking to tuck it and run, which I saw more of as a junior. He’s grown that way.”

Early mock drafts have Willis going to Atlanta, Washington or Philadelphia — all potentially in need of a QB and projected to pick in the top 10.

Nagy said Willis will have competition to be the first QB drafted in 2022, part of a talented group that includes Corral (if he comes out early), North Carolina’s Sam Howell, Pitt’s Kenny Pickett, Cincinnati’s Desmond Ridder and Nevada’s Carson Strong.

“It’s going to make for a fun, pre-draft process with people trying to figure these guys out,” Nagy said.