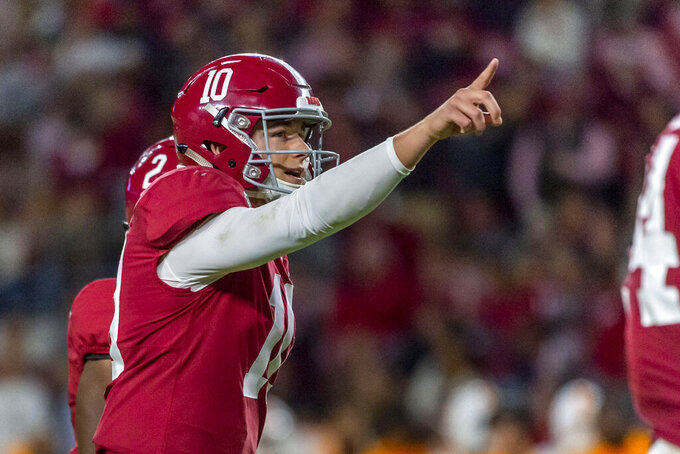 Alabama is about to experience life without Tua Tagovailoa — at least for one game.

For the first time in two seasons, the top-ranked Crimson Tide are preparing for a game with somebody other than Tagovailoa leading the offense. Mac Jones will take the reins Saturday night against Arkansas while Tagovailoa recovers from a high ankle sprain that sidelined him for much of the Tennessee game.

"We've got a lot of confidence in Mac," Alabama coach Nick Saban said Monday. "With a week of preparation, I think he'll do a lot better in this game."

With Alabama still favored by 33 points over the Razorbacks, the big question is, Will Tagovailoa be back in time for the Nov. 9 game against No. 2 LSU as he pledged to teammates after the Tennessee game ? There is an open date in between games and Tagovailoa is familiar with the recovery process from the procedure he had done on Sunday.

It's the same injury he suffered in the SEC championship game last season, except to the other ankle.

"There's no real timetable for his return, but the expectation is he will be non-weight bearing for several days and then he'll be able to come back as his rehab allows him," Saban said. "We're hopeful that in a 10-day period, he'll be back being able to do active-type rehab, and we'll see how it goes from there. But these things are pretty unpredictable at this point."

Tagovailoa has been directing the nation's No. 4 passing offense and spreading the ball around to a quartet of dangerous receivers, among others. Jones entered against Tennessee with about six minutes remaining in the second quarter and finished 6-of-11 passing for 72 yards.

"I think that he didn't do anything that really hurt us in the game," Saban said. "I think that he had two balls that were dropped, that were critical situations in the game. The one play that he scrambled on third down where he could have thrown the ball, I would assume that if you asked him he'd say, 'I wish I would have thrown the ball,' because we would have made a first down and the guy was open.

"All in all, I thought he handled the situation really well. It's a difficult circumstance to get thrown into."

Jones was the third-teamer behind Tagovailoa and Jalen Hurts last season, but a number of lopsided games did get him some action in mop-up duties. He was 5-of-13 passing for 123 yards with a touchdown and no interceptions.

"I think a lot of people underestimate Mac Jones," Tide tight end Miller Forristall said. "I don't think they know how good he's gonna be or how good he is. That's something where it's always been that, 'What's going to happen after Tua?' Mac Jones is really good."

There could still be a Tagovailoa playing quarterback for the Tide at some point in this game. Tua's younger brother, Taulia, will be the backup to Jones.

The freshman, who enrolled in January and went through spring practice, completed his only college pass attempt for a 20-yard gain.

"He's got a lot of talent," Saban said. "We've tried to get him some reps throughout the course of the year in case this happened. So it's going to be really important that we do a good job of progressing him this week as well."