No. 1 Alabama seeks to beat Tennessee for 12th straight year 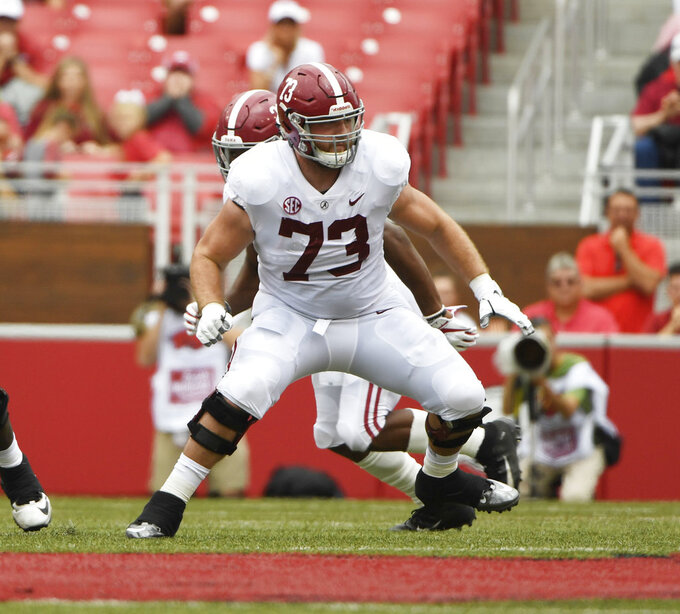 FILE - In this Oct. 6, 2018, file photo, Alabama offensive lineman Jonah Williams sets up to block against Arkansas in the second half of an NCAA college football game, in Fayetteville, Ark. Williams was named to The Associated Press Midseason All-America team, Tuesday, Oct. 16, 2018.(AP Photo/Michael Woods, File) 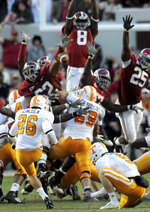 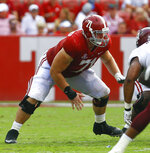 KNOXVILLE, Tenn. (AP) — Alabama's last obstacle before a Western Division showdown with No. 5 LSU is a longtime Southeastern Conference rival it has treated as little more than a speed bump for over a decade.

Yet the top-ranked Crimson Tide say they're taking nothing for granted heading into Saturday's matchup at Neyland Stadium. They have too much understanding of this rivalry and too much respect for the familiar face who has taken over Tennessee's program.

"To me, it's a big game," Alabama coach Nick Saban said. "It doesn't matter what happened last year or 10 years ago. What's going to happen this week is the most important thing and how our players look at that and respond to the challenges with a confident team now. They just had a big win."

Alabama, which is seeking its sixth national title in the last 10 years, has next week off before visiting LSU on Nov. 3.

Tennessee (3-3, 1-2 SEC) is a coming off a 30-24 victory at Auburn that knocked the Tigers out of the Top 25. The road triumph marked Tennessee's first signature win under new coach Jeremy Pruitt , who spent the last two seasons as Alabama's defensive coordinator .

Alabama, a 28 ½-point favorite, has beaten Tennessee each of the last 11 years by an average margin of 24.5 points. The only close calls during the streak came when Terrence Cody blocked a field goal as time expired to preserve a 12-10 triumph in 2009 and when Derrick Henry's go-ahead touchdown with 2:24 left gave the Tide a 19-14 victory in 2015.

"We've got to do our part to create this rivalry again," Pruitt said. "It's not been much of a rivalry the last few years."

Even though Alabama and Tennessee's players were in elementary school the last time the Vols beat the Tide, both teams realize this annual matchup still means plenty to both fan bases.

"This is probably my favorite Tennessee rivalry," Tennessee offensive tackle Trey Smith said. "When I was growing up, I was a big Alabama fan, there's no hiding that. My room back home is crimson. I've watched them growing up all my life. I always told myself growing up I would be in this rivalry game, either wearing crimson or orange. I made my decision, wearing orange. This rivalry means a lot to me.

"Just seeing how it's turned these last couple of years, we want to turn it around."

Here are some things to watch when Alabama visits Tennessee.

Saturday's game marks the return of former Tennessee coach Butch Jones, who went 34-27 with the Vols from 2013-17 before getting fired last November. Jones is working on Alabama's support staff as an offensive analyst. Tide running back Josh Jacobs says Alabama wants to make sure Jones gets a chance to smoke a postgame cigar, something the winning team traditionally does in this rivalry. "He's never smoked the cigar before," Jacobs said. "We're trying to make that a goal of his."

Tennessee's offense had a breakthrough performance last week when offensive coordinator Tyson Helton left the coaches' box and instead worked the game from the sideline. Pruitt said Helton will stay on the sideline this week.

Tennessee is playing its first game since losing outside linebacker Jonathan Kongbo to a torn anterior cruciate ligament. Tennessee tight end Dominick Wood-Anderson got hurt against Auburn and will be a game-time decision. The status of safety Micah Abernathy is uncertain after he missed the Auburn game with an ankle injury. Alabama receiver DeVonta Smith pulled a hamstring against Missouri and didn't practice early this week.