No. 1 Georgia loses Smith as D braces for No. 2 Tennessee 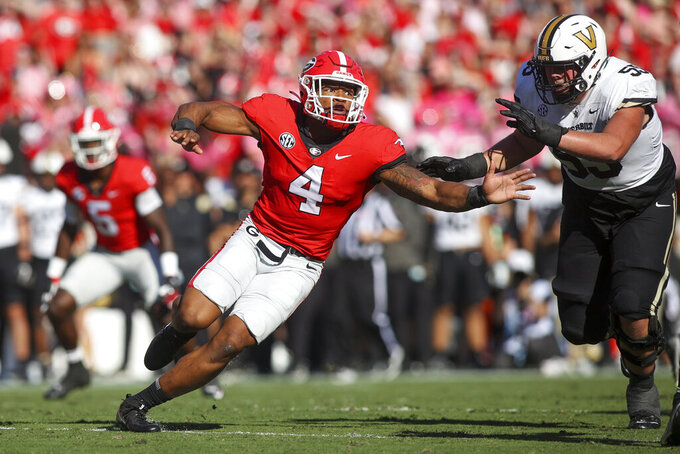 FILE - Georgia linebacker Nolan Smith (4) rushes the passer in the first half of a NCAA college football game against Vanderbilt Saturday, Oct. 15, 2022 in Athens, Ga. No. 1 Georgia finally has the chance to provide proof it again has a championship caliber defense. No. 2 Tennessee brings the nation’s top-scoring offense to Athens on Saturday while Georgia ranks No. 2 in scoring defense but must overcome the loss of outside linebacker Nolan Smith, the team’s sacks leader who has been lost with a torn pectoral muscle. (AP Photo/Brett Davis, File)

Just in time for its biggest test of the season against No. 2 Tennessee's top-ranked offense, top-ranked Georgia's defense has lost outside linebacker Nolan Smith to a season-ending injury.

Smith, who leads Georgia with three sacks and is fifth with 18 tackles, suffered a torn right pectoral muscle in last week's 42-20 win over Florida. Georgia announced Tuesday that Smith, a senior, will have surgery on Thursday and is expected to make a full recovery.

Smith was one of only three returning starters from the 2021 defense that led Georgia to its first national championship since 1980. Despite having eight players from the defense selected in this year's draft, including five in the first round, Georgia (8-0, 5-0 Southeastern Conference, No. 3 College Football Playoff) is second in the nation with its average of 10.50 points allowed.

“I talked to him and asked to help left spirits and push,” Smart said. "That has been his role when he is practicing, so I don’t want him to change now that he is not. He is out there flying around and helping us out. It is great to have him take that on. Not all kids do that. Sometimes you get dejected or down in the dumps. He is not like that.”

Saturday's matchup provides the opportunity for Georgia to prove it again has a championship-caliber defense. Tennessee (8-0, 4-0, No. 1 CFP), tied with Ohio State for No. 2 in the AP poll, leads the nation with its average of 49.4 points per game.

Chambliss said the expectation is to regroup after losing Smith to the injury just as the defense reloaded after losing eight players in the draft.

“We didn’t drop because it’s the standard here,” Chambliss said. “The defense has a standard that we’re going to be the best of the best and it doesn’t change by who’s here or how many draft picks; it’s just the standard here to have a great defense. We practice like that every single day and that’s why we haven’t dropped off.”

The loss of Smith adds difficulty to the already daunting challenge of containing the Vols' fast-paced attack led by quarterback Hendon Hooker. Tennessee leads the nation in total offense and ranks second in passing.

Hooker passed for three touchdowns and ran for a score in Tennessee's 44-6 win over then-No. 19 Kentucky last week.

The win over Kentucky was the Vols' best defensive game of the season, but the spotlight will rest on the matchup between Tennessee's offense and Georgia's defense.

The Bulldogs' secondary will be challenged to contain Tennessee's wide receivers, including Jalin Hyatt, who has set a school record with 14 TD catches, including two against Kentucky. The secondary is led by cornerback Kelee Ringo and safety Christopher Smith.

“One thing is for sure, they’re going to get to cover,” Smart said of his defensive backs. "They’re going to find out. Because there’s no hiding anybody when you play these guys.”

Cedric Tillman, the Vols' top wide receiver last season, returned last week in a limited role after missing much of the season with a high ankle sprain. Tillman could play a bigger role against Georgia.

The winner of Saturday's game will take command of the SEC Eastern Division race for a spot in the SEC championship game.

Hooker said the showdown represents “the top brand of football.”

“As you can see, they have some great coaches behind them, and they play extremely hard,” Hooker said Monday when asked about Georgia's defense. “That’s something that you can’t teach. The effort and attitude and toughness that they bring to the game is immaculate and that’s what SEC football is about.”