No. 1 Georgia, No. 2 Tennessee put title hopes on the line 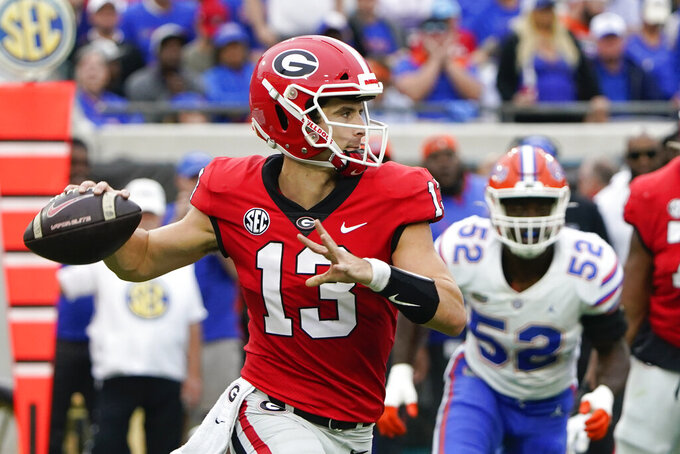 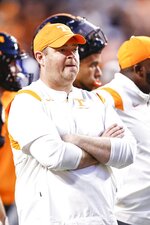 ATHENS, Ga. (AP) — Georgia coach Kirby Smart just smiled and shook his head when asked if he has stressed conditioning in preparation for Saturday's visit from Tennessee and its fast-paced offense.

Smart knows that one week would not have been enough to prepare his Bulldogs for the challenge in the much-anticipated matchup between No. 1 Georgia and No. 2 Tennessee. That extra conditioning work began last summer and has continued through the season.

“If they’re not in shape, then you did something wrong long before (this week),” Smart said. “So we’ve been building towards this week ... since week one, the conditioning level of our players has been a concern every week for me. It’s one of the major concerns, Are you in good enough shape? Because if you’re not, you can’t make it up in one week.”

Led by quarterback Hendon Hooker, Tennessee (8-0, 4-0 Southeastern Conference, No. 1 College Football Playoff) averages a play about every 10 seconds, making it difficult for defenses to substitute players. The pace wears down defenses, helping the Vols lead the nation with 49.4 points per game.

Hooker said the Vols are “playing with a chip on our shoulder day in and day out. We just always feel like we have something to prove and that just fuels us to go work hard every day.”

Georgia (8-0, 5-0, No. 3 CFP) has reloaded after having eight players from its national championship defense selected in this year's NFL draft, including five in the first round. Overall, Georgia had a record 15 players taken in the draft.

Despite the heavy losses on defense, the Bulldogs rank second in the nation with their average of 10.50 points allowed.

Neither team is one-dimensional. Tennessee's defense is coming off perhaps its best game of the season in a 44-6 rout of then-No. 19 Kentucky last week.

Led by senior quarterback Stetson Bennett, Georgia ranks sixth in the nation with its average of 41.6 points per game and second, behind Tennessee, with 530.1 yards per game.

Balance has both teams in position to contend for SEC and national championships. Even so, the spotlight will be on the Vols' high-scoring offense — and the conditioning of the Bulldogs' defense.

“We’re going to find out on Saturday if we’re in shape or not,” Smart said. "I can promise you that because they’re going to try and get a lot of snaps in.”

Hooker's leadership on the field has helped the Vols require 2 minutes or less on 35 of their 63 scoring drives this season.

Hooker passed for five touchdowns in Tennessee's 52-49 win over then-No. 3 Alabama on Oct. 15.

"He’s become a guy that’s operating as highly and as effectively as anybody in the country,” said Tennessee coach Josh Heupel of Hooker.

Former longtime Georgia coach and athletic director Vince Dooley, who died at 90 on Oct. 28, will be remembered in a moment of silence before the game. Also, Georgia players will wear a patch on their uniforms honoring Dooley, who was coach when Georgia won the 1980 national championship. Dooley led the Bulldogs to six SEC titles.

Georgia players will also wear a helmet decal honoring another former Georgia legend, Charley Trippi, who was 100 when he died on Oct. 19.

Hooker transferred to Tennessee from Virginia Tech to play for Jeremy Pruitt and stuck around to play for Heupel. It’s paid off for both coach and quarterback.

Hooker is 14-5 as a starter since coming off the bench last season. He has thrown 219 passes this season with only one interception, and he leads the SEC with his average of 334.5 yards of total offense.

The Vols rank second in the nation with their average of 17.63 points in that quarter. Oregon is first with 17.75.

Tennessee leads the nation by outscoring its opponent by an average of 12.5 points in the second quarter, just ahead of Georgia's 10.13.

Tennessee will have wide receiver Cedric Tillman back for a second straight game after needing surgery to fix a sprained ankle. But sophomore Jalin Hyatt has filled in quite capably in Tillman’s absence.

Hyatt leads the nation with 14 TD catches, four more than the next closest receiver. He ranks fourth with 114.4 yards receiving per game and 907 yards receiving. He needs just 93 yards to become the 10th in school history to reach 1,000 yards in a season.