No. 1 Georgia's title hopes boosted by down year in SEC East 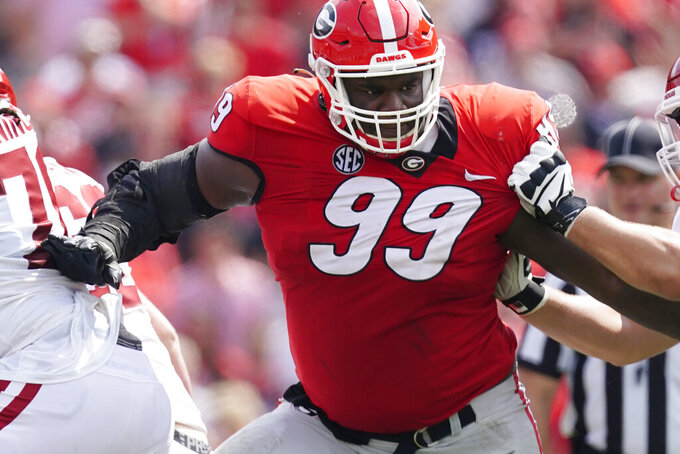 Playing in the top-heavy SEC East could work out well for No. 1 Georgia's championship hopes.

The Bulldogs appear to have a smooth path to the Dec. 4 Southeastern Conference championship game in Atlanta. They can thank the Eastern Division.

Georgia plays Florida on Saturday as the first of three consecutive games against SEC East teams which currently have losing conference records.

Despite having Georgia to boost its credibility, the East lacks depth and is again playing catch-up to the West, which has won 11 of the last 12 SEC championships. The East's lone SEC champion in that span was Georgia in 2017.

Since Florida won its last SEC title in 2008, Alabama has seven conference championships. LSU and Auburn each have two.

While the Bulldogs rested, the disparity between the divisions was glaring last weekend. Three teams from the West — Alabama, Mississippi State and Texas A&M — took lopsided wins over Tennessee, Vanderbilt and South Carolina, respectively, by a combined 97 points.

The West boasts four of the SEC's six teams in this week's Top 25: No. 3 Alabama, No. 10 Mississippi, No. 14 Texas A&M and No. 18 Auburn. A fifth team from the West, Arkansas, leads teams also receiving votes.

Meanwhile, the East lacks depth. Georgia and Kentucky are a combined 9-1 in SEC games. The division's other five teams are 5-17.

Georgia coach Kirby Smart insists the East “is a really good division ... but who am I to judge when we see each other more than most people do, in terms of watching tape and crossover.”

Smart said Florida has been the victim of close losses. Most notable was the Gators' 31-29 home loss to Alabama to open their conference schedule. Perhaps most damaging to Florida coach Dan Mullen was a 49-42 loss at Louisiana State.

“When I sit back and watch games on Saturday, there are some really tough games in the SEC whether it’s East-West, West-East,” Smart said Monday. “It’s a tough conference. A lot of games are decided really close, typically. Florida has been in a couple of those that they ended up on the short side of, but they have a really good football team.”

Florida's drop from the Top 25 is unusual. This is the first Georgia-Florida game since 2017 when both teams are not ranked in the top 10.

Even so, it's always an important highlight for both teams.

“Yeah, this is a big game,” said Florida defensive lineman Zach Carter. “We all know what’s at stake. Right now we’re playing to finish strong and end the year on a good note. So getting this win would mean a lot, especially potentially knocking off the No. 1 team.”

It has been a difficult year for Mullen. Beating the Bulldogs could make Florida's season.

“We’re very aware,” Georgia defensive tackle Jordan Davis said Monday. “We feel like that’s it for every team. Every team wants to beat us. That’s the name of the game.”

A Florida win over Georgia would make the East look like a deeper division. But the Gators are worried about their reputation, not the lack of respect for their division.

“We want to win championships here: SEC championships and national championships,” Carter said. "Obviously, you know, we can’t get to that this year. ... When you think about it, we’re still playing for a lot. I mean, just the Gator standard in general. You now, it’s bigger than this year. I want to help finish off strong so those guys next year can start off strong.”