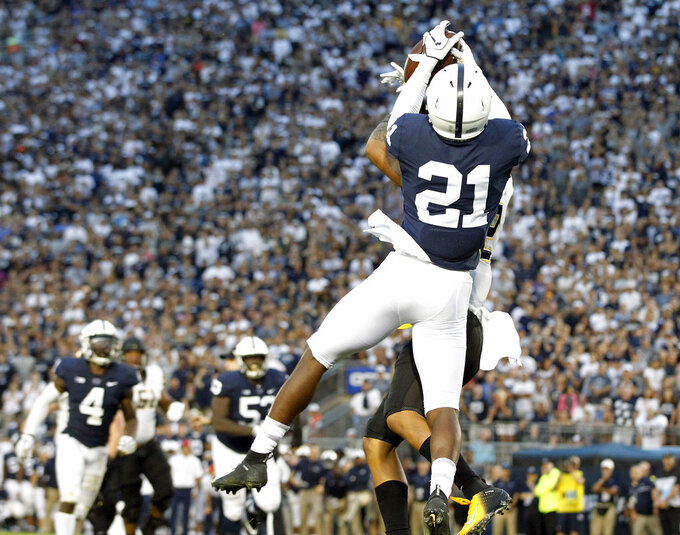 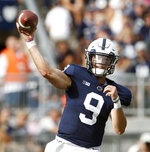 STATE COLLEGE, Pa. (AP) — After squandering a 14-point, fourth-quarter lead to a program with a history of being a giant killer, things grew tense in Happy Valley.
Not for Penn State quarterback Trace McSorley.
The Heisman Trophy hopeful led a game-tying drive with less than a minute to go to force overtime and No. 10 Penn State rebounded to hold off Appalachian State 45-38 exactly 11 years after the Mountaineers stunned Michigan in one of the biggest upsets in college football history.
With two defenders in his face, McSorley, who was 21-for-36 passing for 230 yards and two rushing touchdowns, fired off his back foot to KJ Hamler for the 15-yard score with 42 seconds left. Penn State's defense held on to send the game to overtime where Miles Sanders scored the go-ahead touchdown for the Nittany Lions (1-0) and cornerback Amani Oruwariye intercepted a Zac Thomas pass in the end zone to seal the win.
"I don't know what's in the water in Boone, North Carolina, but it seems like they've been doing this for a long time against whoever they play," Penn State coach James Franklin said. "I started the game at 46 years old. I ended it at 51."
McSorley went on the field with 1:47 left and his team trailing 38-31 after watching the Mountaineers score on three straight possessions over 5:53 in the fourth quarter. Any stress?
"Not really," McSorley said. "I think it's just because I love playing football and I think that's the best thing about our team. Everyone loves playing football. There's no one out there who's nervous."
Sanders, who played well in Saquon Barkley's shadow the last two seasons, looked calm taking over primary rushing duties. He ran 19 times for 91 yards with two touchdowns, but it took a Jake Pinegar field goal to let Penn State head into halftime in a 10-10 tie.
In fact, the Mountaineers controlled much of the game before that and rebounded after surrendering two scoring drives to open the third. Thomas, who was briefly knocked out of the game after being sandwiched violently between defenders early in the fourth, led the way in front of more than 105,000 people, Penn State's largest home-opening crowd in a decade.
Making his first career start, Thomas completed 25 of 38 passes for 270 yards, threw for two touchdowns and ran for another for Appalachian State (0-1). Jalin Moore ran 18 times for 88 yards and scored a go-ahead touchdown on a 16-yard run. Malik Williams caught two touchdowns for the Mountaineers and Chandler Staton added a 38-yard field goal.
"That was a resounding yes that we won't back down, we will keep fighting," Appalachian State coach Scott Satterfield said. "That's the heart of our program for the last 30 years. (At least) since I've been here."
HISTORY NEARLY REPEATS
In 2007, it was No. 5. Michigan fighting for its life trying to make a game-winning kick at home against the I-AA Mountaineers. But Corey Lynch blocked Michigan's field-goal attempt to seal the 34-32 win. No I-AA team had ever beaten a team ranked in The Associated Press Top 25 poll between 1989 and 2006, and it's unlikely it had ever happened before. Afterward, the AP changed the way it conducted its poll, allowing schools from all divisions to be eligible to receive votes.
On Saturday, another storied Big Ten program was on its heels against the Mountaineers, a Sun Belt Conference powerhouse that went 8-4 a year ago. There was a late field-goal try, too, but the 56-yard bid from Staton sailed wide right to set up OT.
THE TAKEAWAY
Appalachian State: The Mountaineers continued their trend of playing Top 25 teams tough in season openers. Two years ago, they also lost in overtime on the road to a top 10 opponent (20-13 to No. 9 Tennessee) and hung tough against Georgia last season. They looked poised to deliver another stunning performance in another massive stadium but came up just short. Despite the loss, they appear to have the pieces to make a run at what would be at their third straight Sun Belt championship.
Penn State: Having lost their three top playmakers and vaunted offensive coordinator Joe Moorhead, who took over as Mississippi State's head coach, the Nittany Lion offense looks like a work in progress. McSorley can do plenty with his legs if he and his receivers aren't on the same page but Penn State's defense couldn't get a stop in the fourth quarter where the Nittany Lions were outgained and outscored 28-14.
POLL IMPLICATIONS
Penn State: It wasn't a pretty showing by any means, but the Nittany Lions have enough talent and one of the best players in the country in McSorley to stay among the poll's elites.
UP NEXT
Appalachian State travels to Charlotte on Sept. 8
Penn State visits Pittsburgh on Sept. 8.