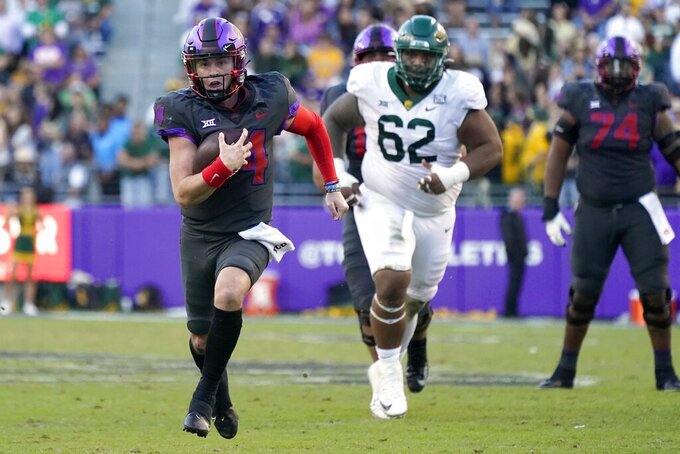 Oklahoma State is playing some of the best defense in program history.

The 10th-ranked Cowboys are coming off dominant wins of 55-3 over Kansas and 24-3 over West Virginia the past two weeks. Oklahoma State (8-1, 5-1 Big 12, No. 10 CFP) held Kansas to 143 yards, then held West Virginia to 133, the fewest yards it has allowed since 2000. The Cowboys have held consecutive opponents to three or fewer points for the first time since 1934.

TCU interim coach Jerry Kill knows what his Horned Frogs are up against on Saturday.

“They don’t make mistakes,” he said. "They’re assignment-sound, they play hard, relentless. They’re great tacklers. They tackle very, very well. They tackle and strip as good as any football team I’ve seen in a long time.”

Oklahoma State has improved to third nationally in total defense, fourth in rushing defense and ninth in scoring defense. The success has pushed the Cowboys into the College Football Playoff conversation.

“I feel that we’ve got enough maturity and leadership from our guys to stay focused and practice hard and continue the things that have got us to this point,” he said. “It’s really been that simple for us up to this point.”

The key to Oklahoma State’s defense is linebacker Malcolm Rodriguez. He was named the 2021 Associated Press Big 12 Defensive Player of the first half of the season. He is a Butkus Award semifinalist who leads the Big 12 in tackles per game (9.7) and has 8.5 tackles for loss.

Morris played because regular starter Max Duggan has a broken bone in his foot. Kill seemed uncertain how much he’d play each quarterback Saturday because Morris was “banged up.” He said Duggan will suit up and “may play some.”

Either way, Gundy expects to see Morris and said he left an impression on the Cowboys.

“He played really well and they played very inspired football in the last game, very inspired,” Gundy said. “That should help our players in preparation for them when they watch how well they played on tape last Saturday.”

TCU could be without its top two running backs.

Zach Evans has missed the past two games with a toe injury. He leads the Horned Frogs with 648 yards rushing and has rushed for five touchdowns, but seems unlikely to play. Kendre Miller suffered a rib injury against Baylor. He has 511 yards rushing and leads the team with six rushing touchdowns. Kill planned to limit his practice time during the week.

“He was a leader, an outstanding leader in high school and was very smart and studied the game,” said Kill, a linebackers coach at the time. “He was way beyond his years, and that’s what made him a good player. He’s a leader and smart and the biggest thing he did was he knew how to do was win.”

Gundy said they have stayed in touch sinc.

“He’s an old-school tough guy that I’ve always had a lot of respect for,” Gundy said,

Oklahoma State has found its latest game-breaking receiver. Tay Martin has at least one touchdown reception in each of his past three games. During that stretch, he has 16 receptions for 227 yards and four touchdowns. Overall, he has 43 catches for 592 yards and six scores.

Former Oklahoma State running back Barry Sanders will be honored on Saturday.

A nine-foot bronze statue of the 1988 Heisman Trophy winner will be unveiled outside of Oklahoma State’s Boone Pickens Stadium before the game. At halftime, Sanders’ name and number will be put in the Cowboy Football Ring of Honor inside the stadium. He will join former Oklahoma State running back Thurman Thomas as the first two names in the Ring of Honor.