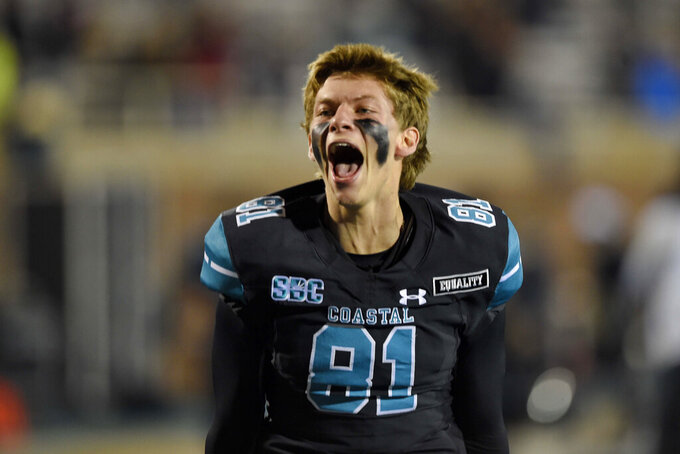 The Coastal Carolina Chanticleers are fresh from their first win over a top 10 team with a shot at a Sun Belt Conference championship awaiting.

Coastal Carolina coach Jamey Chadwell said managing that combination of potential distractions might be the coaching staff's biggest challenge of the season.

“We’ve got a big challenge this week," Chadwell said. "One with our opponent, they’re highly skilled. We’re coming off a big win and know the championship game’s ahead as well. There’s a lot we’re dealing with as well. We’re going to have to be focused if we’re going to try and get a victory.”

The Trojans are hoping to pull off a double whammy: A significant upset and securing a winning regular season record. They've never hosted a team this highly ranked, and the Chanticleers are just the fourth Top 25 team to visit Veterans Memorial Stadium.

“This week is a great opportunity to play one of the best teams in the country at home in Coastal Carolina,” Trojans coach Chip Lindsey said. "Jamey Chadwell does a great job and in year three you can really see the difference.

“They’ve gone from winning three games his first year to being undefeated this year. You can see them growing up.”

The Chanticleers coach isn't happy the his team is having to make up the game against the Trojans while Louisiana-Lafayette enjoys a week off. Chadwell said that's "definitely a competitive advantage for them."

“We all know Louisiana is getting a great opportunity to be sitting at home resting,” he said. "We’ve got to go play a game that means nothing to anybody, except us. It can only hurt us. So that was the frustration from my point. At the end of the day, our job is we got to go win the game.

“It’s a respect thing, to be honest with you. Our players see who respects us and who doesn’t.”

Some Coastal Carolina fans celebrated the BYU win on the field, raising concerns about heightened coronavirus risks. “There was a lot of excitement,” Chadwell said. “We've done a good job up to this point, but that was a unique situation and circumstance on Saturday, but hopefully we'll be OK.”

One perception about Coastal Carolina Chadwell is eager to shoot down is that this team is good story for pandemic times, but won’t last once college football goes back to normal. Chadwell said he and his staff are building a program that can compete in the Sun Belt Conference year in and year out. “We don’t want to be a one-hit wonder,” Chadwell said.

Chadwell saw plenty of things for his team to correct in the BYU win. But he was proudest of the effort his players gave against their biggest challenge of the year in the Cougars. “If you watched, our guys laid it on the line out there and left it on the field,” Chadwell said. “That’s what we want to be known about.”

Troy quarterback Gunnar Watson is coming off one of his better games. Watson completed 34 of 41 passes for 297 yards and three touchdowns in a 29-0 win over South Alabama.

“Gunnar played probably as well as he has all year on Saturday,” Lindsey said.