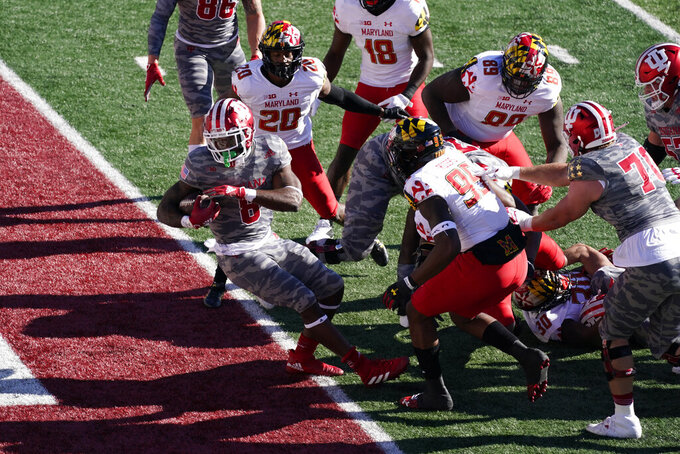 Indiana running back Stevie Scott III (8) goes in for a touchdown during the first half of an NCAA college football game against Maryland, Saturday, Nov. 28, 2020, in Bloomington, Ind. (AP Photo/Darron Cummings)

Now the 12th-ranked Hoosiers might need even more from Allen's improved defense.

After Stevie Scott III ran for three scores in a 27-11 victory over Maryland on Saturday, Allen's biggest postgame concern was the health of quarterback Michael Penix Jr., who left the game in the third quarter with a lower right leg injury and did not return.

“I don’t know. If I knew I’d tell you," Allen said when asked whether Penix could play next week. “The bottom line is he’s going to be evaluated and we’ll know more Monday."

Penix left midway through the third quarter after being tackled out of bounds. Initially, he couldn't put any weight on the leg.

With or without Penix, the Hoosiers remain confident they can finish the job because of the guys on the other side of the ball.

On Saturday, Indiana completely shut down quarterback Tailua Tagovailoa and the Maryland offense over the final three quarters and delivered the key play midway through the third quarter with the ball at the Terrapins 4-yard line.

Tagovailoa faked a handoff inside and sprinted to his right. Linebacker D.K. Bonhomme followed Tagovailoa and buried him in the end zone to give Indiana a 9-3 lead, the momentum and the ball.

“Any time you get into the read-option when the read key makes the tackle, you’ve misread it," coach Michael Locksley said. “I don’t understand why the ball wasn’t given. It’s pretty simple math — the guy that tackled him was the guy that read it. For me, that goes back to me as the coach."

Penix was injured on the ensuing series but Indiana didn't miss a beat. Scott scored on a 1-yard plunge two plays later and backup quarterback Jack Tuttle hooked up with Peyton Hendershot on a 2-point conversion to make it 17-3. Tuttle completed all five of his passes and led the Hoosiers to two more scores in the fourth quarter, taking advantage of a ground game that rushed for a season-high 234 yards.

“Momentum is a huge part of this game, so I think once you get a couple of big runs, a couple of good runs or a couple of good blocks, it really carries you," said freshman Tim Baldwin Jr., who ran for a season-high 106 yards. “You saw what happened with the defense today."

So did Maryland (2-2), which struggled mightily in the red zone after taking the last two weeks off because of a COVID-19 outbreak. Tagovailoa missed two open receivers for potential scores in the first half and was picked off twice in scoring position. Joseph Petrino also missed a 29-yard field goal wide left on the first possession of the game.

“When you turn it over three times and have a safety, eight penalties, we didn’t give ourselves a chance," Locksley said.

Maryland: Clearly, the Terrapins were rusty. Perhaps that should have been expected. But the offense regressed after moving the ball well in the first half.

Indiana: Penix is expected to undergo more tests this weekend. Regardless of his status, the Hoosiers hope to continue running the ball effectively and playing aggressive defense. That formula could carry Indiana a long way, especially if No. 3 Ohio State can't fulfill the Big Ten's six-game minimum to be eligible for the conference championship game.

Last week's narrow loss at Ohio State turned many into believers, and the Hoosiers could soon return to the top 10.

Maryland: “They disguise their coverage," Tagovailoa said, referring to two early interceptions. “That was me trying to do too much and not reading my keys. That’s stuff I can learn from and get better at."

Indiana: “It’s not by chance, I promise you that,” Allen said when asked about the takeaways. “Just watch the film. We work extremely hard to create takeaways."

Maryland: At Michigan next Saturday.

Indiana: The Hoosiers will try to clinch the No. 2 seed in the Big Ten East next Saturday at No. 16 Wisconsin.