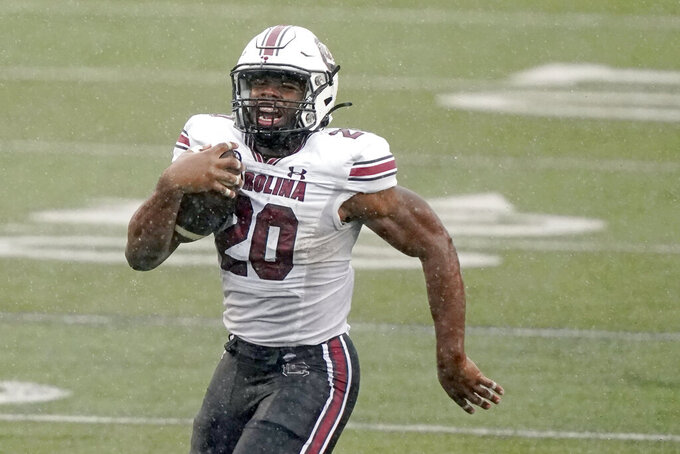 Auburn is hoping to keep pace in the ultra-competitive Southeastern Conference after falling to No. 3 Georgia two weeks ago. The Tigers bounced back with a 30-28 win over Arkansas on a late field goal after Auburn quarterback Bo Nix spiked the ball, which some thought was a backwards lateral. South Carolina is seeking its second straight win for the first time in 10 games after defeating Vanderbilt 41-7 last week.

South Carolina RB Kevin Harris vs. Auburn's defensive line. Harris has run for 100 or more yards the past two weeks and the Gamecocks will need similar production if they hope to defeat Auburn for the first time since 1933. The Tigers have not allowed a 100-yard rusher this season despite being 10th in the SEC against the rush.

Auburn: RB Tank Bigsby. The freshman put up 268 all-purpose yards against Arkansas last week. That was the first time a Tiger has surpassed 250 yards in that category since Tre Mason in 2013.

South Carolina: WR Shi Smith is third in the SEC with 27 catches with two touchdowns. Smith is sixth nationally in receptions per game.

Auburn has won the past eight games against South Carolina, dating to 1933. ... South Carolina coach Will Muschamp worked at Auburn in three separate occasions, including for current coach Gus Malzahn in 2015 the season before getting the Gamecocks' job. ... Bigsby had 146 yards rushing and receiver Anthony Schwartz had 100 yards receiving against Arkansas, the first time in three years the Tigers had a rusher and receiver surpass the 100-yard mark in the same game. ... In Auburn's 24-17 victory at South Carolina in 2007, the Tigers held the Gamecocks without an offensive snap in the third quarter. ... Redshirt sophomore Shilo Sanders had his most extensive action in South Carolina's secondary last week, making 5.5 tackles against Vanderbilt. Sanders is the son of Pro Football Hall of Famer and Jackson State head coach Deion Sanders.