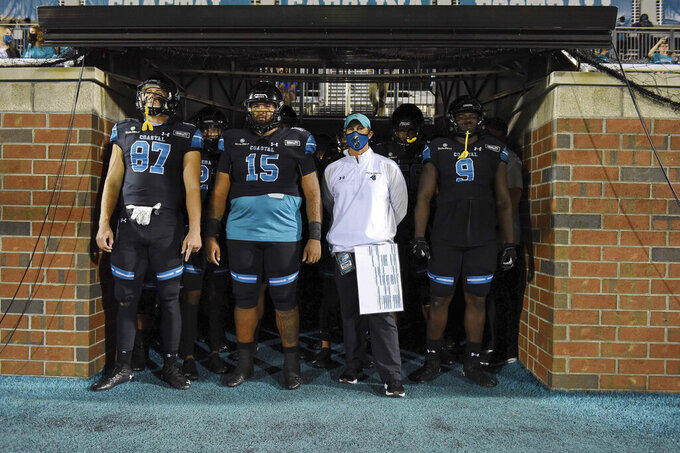 Coastal Carolina doesn't want to get caught looking ahead, while Troy needs only to look back for motivation.

“We’ve got good leadership,” Coastal Carolina coach Jamey Chadwell said. "I think our guys are locked in and focused. If we don’t play well, I don’t think it’s because we’re looking forward.”

The Trojans well remember last season's meeting. The Chanticleers won that game 36-35 when CJ Marable rushed for a 3-yard touchdown with 30 seconds left and added the two-point conversion. The initial attempt had failed but Troy was called for pass interference.

They're the highest ranked team ever to visit Troy and only the fourth Top 25 opponent to make the trip. The Trojans, who have won one of those games, are looking at it as a chance to turn their season around.

“If we win this one, that Georgia Southern and that Georgia State taste is out of our mouth,” Troy offensive lineman Jake Andrews said, “because it kind of redefines a whole lot of things for us.”

The Trojans' two league losses have come by a total of nine points to Georgia State and Georgia Southern, in addition to a blowout loss to No. 8 BYU.

“They’re a dangerous team and one we have to go down there and play well if we’re going to try to come out with a victory,” Chadwell said.

Coastal Carolina hasn't allowed a touchdown in the last 10 quarters.

Lindsey said he’s “hopeful” that starting quarterback Gunnar Watson would return after missing the past two games with a rib injury.

“We’re hopeful, but we were hopeful last week too,” Lindsey said. “I don’t want to play him until I’m convinced that he can protect himself and he’s comfortable.”

Jacob Free started in his place but struggled against Georgia Southern and was intercepted twice.

Coastal Carolina linebacker Silas Kelly said the Chants have been a success this year because of how well all groups — offense, defense and special teams — have played together. “It’s a really united team. It’s awesome to play for, just know whether one thing goes right for the offense or something goes wrong for the defense, the other side’s got your back,” he said.

Coastal Carolina offensive lineman Trey Carter says he and the team don’t spent much time worrying about their national ranking or place in the national college football picture. It is nice, though, he said seeing more and more people recognizing the players when they’re out and about in their Coastal shirts and hats. “People are starting to see them at Walmart with their Coastal stuff on,” he said. “But hey, one week at a time. We’re trying to achieve bigger stuff.”

Watson’s injury led Chadwell to reminisce about his own rib injury in high school. “I was probably doing something I shouldn’t have been doing and I won’t share that with you guys,” Chadwell said.

The Trojans have four defensive touchdowns over the past three games, scoring at least one in three straight times for the first time as an FBS program. Dell Pettus kept that streak alive with a 44-yard interception return against Georgia Southern.