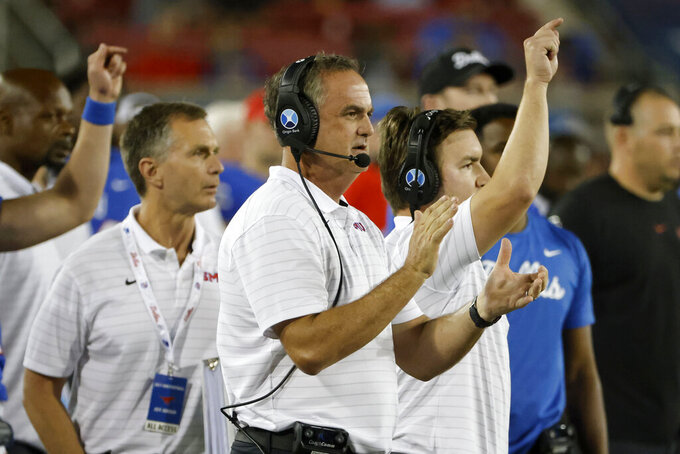 The Mustangs (7-0, 3-0 American Athletic) enter Saturday’s game at Houston (6-1, 4-0) among the group atop of the league standings with a month left in the season.

Just two seasons ago, SMU opened the season 8-0 before faltering over the final month, losing games at Memphis and Navy to miss a shot at hte league championship and finish the season 10-3.

“That’s the kind of consistency you want in a program,” SMU coach Sonny Dykes said. “That’s kind of been our deal from the get-go. If you want to be a big-time college football program, the name of the game is consistency. You can have some good years and you can be a flash in the pan, but if you want to be the real thing, then you have to do it consistently.”

For the Mustangs to achieve their goals, they can’t let a similar letdown happen again.

The Mustangs can’t look past the Cougars, who are riding a six-game winning streak. The schedule doesn’t get any easier for SMU with a game at Memphis and one at home against UCF before the big one – a trip to No. 2 Cincinnati on Nov. 20.

For the game against Cincinnati to mean the most, the Mustangs have to continue winning, starting Saturday at Houston.

“Our goal is to end the year in the Top 25, which we haven’t done,” Dykes said. “We’ve lost games late, and we can’t afford to do that this year. Our goal is to continue to move up in the rankings, but most importantly finish the season ranked.”

Soon after Texas Tech fired coach Matt Wells, Dykes' name began to circulate as a possible candidate for the position. Dykes is the son of beloved former Texas Tech coach Spike Dykes, who died in 2017, and was an assistant coach for the Red Raiders.

Dykes, who is 29-14 at SMU since taking over in December 2017, downplayed the rumors, adding that his focus is on his team and the game against Houston this week.

Houston went 4-8 in 2019 and 3-5 in the pandemic-shortened 2020 season. But its six-game winning streak, its longest in more five years, means the Cougars will be playing important games the last month of the season.

“That’s the way it should be,” coach Dana Holgorsen said. “It hasn’t happened since I’ve been here … we’ve put ourselves in a good position.”

Mordecai leads the nation with 29 passing touchdowns and has completed 71% of his passes this season while averaging more than 331 yards passing per game. The Mustangs offense has scored at least 31 points in every game this season.

For the second time this season, Houston’s offense went cold in the second half against East Carolina last Saturday. The first time it happened, the Cougars allowed 31 unanswered points against Texas Tech in a season-opening 38-21 loss.

Against the Pirates, Houston totaled 77 yards, missed two field goals, fumbled once and punted five times in the second half. The Cougars escaped with a 31-24 win in overtime.

“How we played offensively is not good enough,” Holgorsen said. “If we play like that against SMU, we are going to have some problems because you know these guys can score.”

Both SMU and Houston have excelled this season at getting off the field on third down. Houston leads the nation with a third-down defensive percentage of 23.4%, while the Mustangs are 30th in the nation and third in the American at 34%.