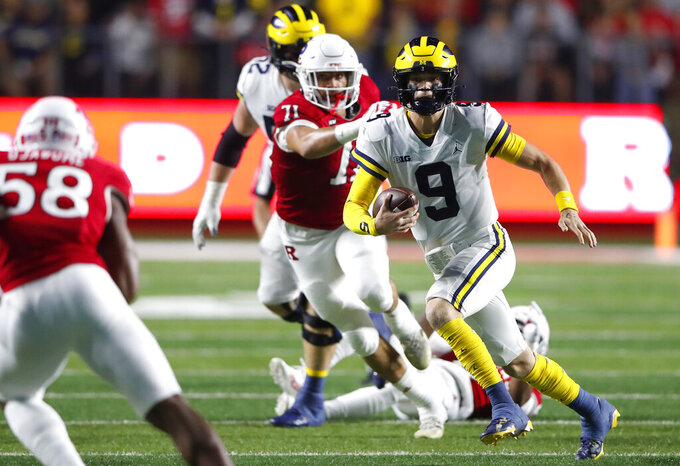 PISCATAWAY, N.J. (AP) — College football games tend to be decided in the second half and No. 4 Michigan has been a beast in the final 30 minutes the past four games.

J.J. McCarthy threw for two touchdowns and ran for another, and the Wolverines rallied from their first halftime deficit of the season to beat Rutgers 52-17 on Saturday night.

The Wolverines (9-0, 6-0 Big Ten, No. 5 CFP) outscored Rutgers 38-0 in the second half, overcoming a 17-14 deficit. They have a 100-3 advantage in the second half of their last four games, including wins against Indiana, Penn State and Michigan State.

“Really proud of our guys," Michigan coach Jim Harbaugh said. "Rutgers had momentum coming off the field in the first half and our guys were real quiet at halftime, got our minds right and go out there for the second half and our guys didn’t flinch. It was fun to be a part of.”

Running back Blake Corum had two short TD runs and linebacker Michael Barrett intercepted two passes in a big third quarter, returning the second one 31 yards for a touchdown as Michigan matched its best start since 2016.

Timmy Ward scored on a 7-yard return of a blocked punt, Jude McAtamney kicked a 32-yard field goal and Wimsatt threw a 3-yard TD pass to Sean Ryan to give the 25-point underdog Scarlet Knights the lead.

It didn't prevent Rutgers (4-4, 1-5) from losing its 36th straight game to a ranked opponent, and eighth in a row to Michigan.

“What was important to me was we played clean football in the first half,” Rutgers coach Greg Schiano said. “The penalties disappeared, there were zero, no turnovers — it was clean football. To beat a team that is a national championship contender you have to play clean football for 60 minutes.”

The Wolverines wiped out the lead with a 21-point blitz early in the third quarter fueled by Barrett, who had never had an interception at Michigan.

McCarthy hit Donovan Edwards with a go-ahead, 14-yard TD pass with 8:24 left in the quarter. On the second play from scrimmage after that, Barrett stepped in front of Wimsatt's pass to Ryan and returned it to the 10-yard line. Corum scored from 2 yards out for a 28-17 lead with 6:53 left.

Nine seconds later, Barrett scored on his interception return and the game was all but over.

"Once we come out in the second half, we get that breath, just feeling good and at that point, we’re ready to come out and hunt as wolves,” Barrett said.

The finish was delayed a few minutes while medical personnel attended to a member of the chain crew who became ill. He was taken off the field in a wheelchair.

Michigan: The Wolverines finally looked like one of the best teams in the country in the second half. They came in just out of the CFP picture and scuffled early, but losses by Tennessee and Clemson could help them move up in the rankings. Michigan's most direct path to the playoff is winning a second straight Big Ten title, which likely means going 12-0 with a victory at rival Ohio State.

Rutgers: The Scarlet Knights have to win two of their final three to have any shot at playing in a second consecutive bowl game. After Michigan State, they play No. 16 Penn State and finish at Maryland.

Michigan: Will host Nebraska on Saturday.