No. 7 Ole Miss puts unbeaten mark to the test at upstart LSU 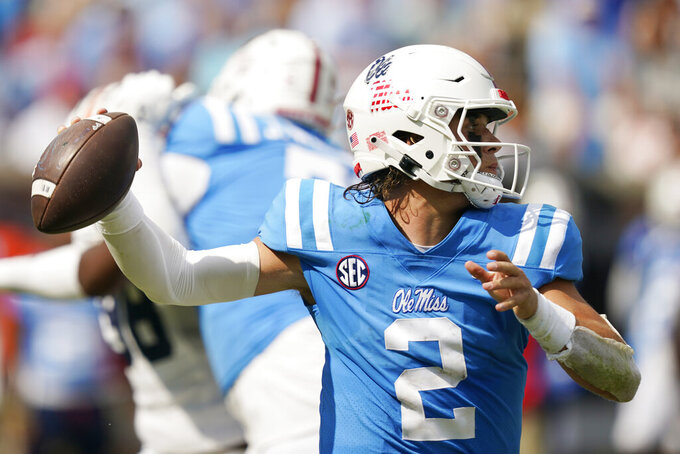 Line: LSU by 1 1/2, according to FanDuel Sportsbook.

Ole Miss has an unbeaten record, top-10 ranking and SEC West Division lead to protect. LSU is on the cusp of returning to the AP Top 25 after winning at Florida last week and can stay in contention to win the SEC West by beating the Rebels.

The Ole Miss running game, averaging nearly 272 yards per contest, against LSU's formidable and experienced defensive front, which will have the crowd on its side and is allowing just less than 146 yards per game.

Mississippi: QB Jaxson Dart, a transfer from Southern Cal, has passed for 1,488 yards and 11 TDs and has rushed for 371 yards in his first season with the Rebels.

LSU: QB Jayden Daniels, a transfer from Arizona State, has accounted for 16 TDs (10 passing, 6 rushing). He's completed 69.2% of his passes for 1,564 yards with just one interception and also leads the Tigers in yards rushing with 403. Daniels needs one more touchdown rushing to tie the single season LSU record for QB scoring runs, set by Joe Burrow in 2018.

Ole Miss running backs Quinshon Judkins(720 yards) and Zach Evans (605 yards) lead the Rebels ground game and are the only teammates in college football to both have run for more than 600 yards this season. ... The Rebels' 24 TDs rushing ties them for the most in the nation among Football Bowl Subdivision teams with Georgia and Michigan. ... Ole Miss' third-down conversion rate of 55.2% ranks first in the SEC and third nationally. ... LSU has a 42-24-1 record against Mississippi in Baton Rouge. ... The home team has won eight of the past 10 meetings. ... Malik Nabers leads LSU with 32 receptions for 418 yards and a TD, followed by Kayshon Boutte with 23 catches for 245 yards and one score. ... The Tigers' defense is allowing 21.3 points and 338 total yards per game. ... LSU DE BJ Ojulari has a team-high 4 1/2 tackles for loss and 3 1/2 sacks.