QB Trask: Florida ran out of time in comeback against Tide 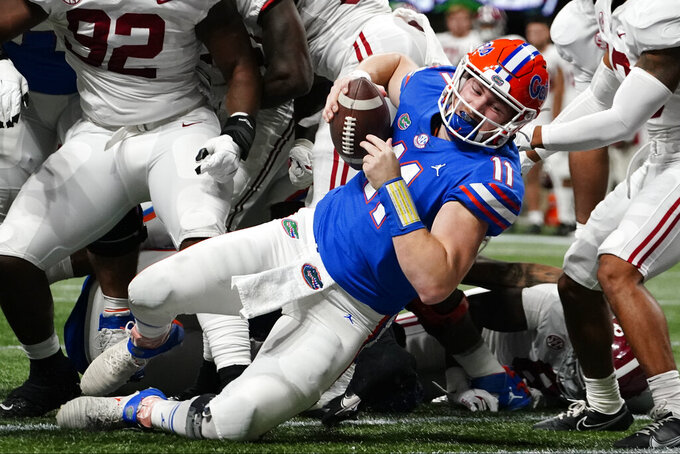 Florida quarterback Kyle Trask (11) leaps into the end zone for a touchdown against Alabama during the first half of the Southeastern Conference championship NCAA college football game, Saturday, Dec. 19, 2020, in Atlanta. (AP Photo/Brynn Anderson)

ATLANTA (AP) — Hearing the officials confirm time had run out on the Florida Gators was too much for Kyle Trask to take.

Trask fell to one knee after the No. 11 Gators' comeback fell short in a 52-46 loss to No. 1 Alabama in the Southeastern Conference championship game on Saturday night. After he tried to stand, he fell back to his knee again and slumped over in despair.

Shortly after the game, the Florida quarterback still was in anguish as he insisted the outcome would have been different if only his team had more time.

“Yeah, it’s just a tough loss,” Trask said. “We worked extremely, extremely hard for this game. We prepared for this game like no other. ... We were rolling pretty good. We just ran out of time.”

Florida was denied its attempt to win its first SEC title since 2008. With an upset win, the Gators could have been in the discussion to have been included in the College Football Playoff. Instead, they're left to plan for next season.

“We’ve got some young guys and they’re going to be hungry to get back here,” Florida coach Dan Mullen said. “Usually, you’re looking at every year the best teams in the country are playing each other in this game. To be here was great for our guys. We want a lot more than just getting here and showing up.”

Mullen said the team’s postgame mood was “a little bit somber” because it was “probably the last time this team probably plays together.”

Asked if he was indicating some players might opt out before a bowl game, Mullen said: “You like to blow things way out of proportion. But that was probably the last time this team probably plays together, this team as put together right now.”

Alabama led 37-17 at halftime after Trask was held to only 179 yards passing with one touchdown. The senior Heisman Trophy candidate finished with a strong half that boosted his final totals to 408 yards and three touchdowns without an interception. He also ran for a score.

Florida had only 16 seconds remaining and no timeouts when it took possession for the last time at its 12. Mullen took responsibility for wasting a timeout before a successful 2-point play following the Gators' last touchdown.

“That was bad clock management on my part,” Mullen said. “... I’d have loved to have that time out at the end.”

Trask was sacked on the first play from the 12 and the clock expired before he could get off another play.

“Coming into this game, there’s things you have to do to win,” Mullen said. “Win the turnover battle. We didn’t do that. ... We made some mistakes with penalties and didn’t get off the field.”

The Gators needed big passing numbers from Trask to make up for a defense that gave up 35 or more points in five games — including consecutive losses to LSU and Alabama.

The Gators had a potentially game-changing play turn against them late in the opening quarter.

The exchange of turnovers allowed Alabama to regain possession at the Florida 31. On the following play, Smith's touchdown reception gave the Crimson Tide a 14-7 lead. Florida never pulled even again.