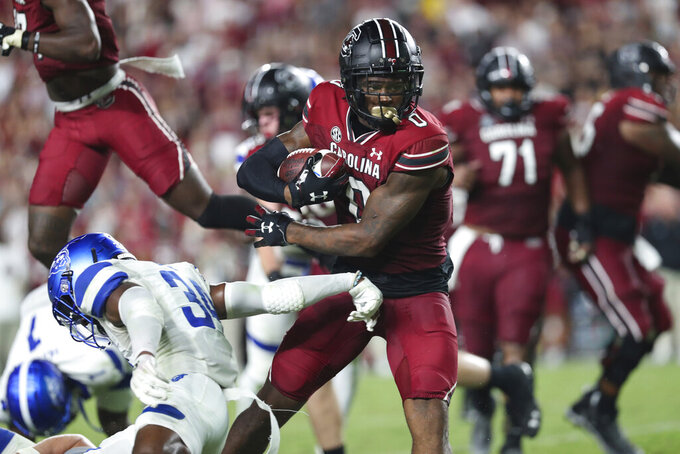 There’s little chance the same will be said after two months.

The powerhouse league has arguably its deepest and most skilled tight-end group in years. The collection includes big-time playmakers and is sure to produce NFL first-round draft picks such as Kyle Pitts (Florida), Hayden Hurst (South Carolina), Evan Engram (Ole Miss) and O.J. Howard (Alabama).

Here’s a look at the best of the SEC’s current crop, five of whom will share a field when South Carolina (1-1) hosts top-ranked and defending national champion Georgia (2-0) on Saturday:

Bell might be the most multifaceted tight end in the SEC, possibly in the country. The 6-foot-3, 230-pound junior from Lake City, Florida, lines up all over the field. He has four catches for 18 yards to go with 11 carries for 44 more. He also owns the top two receiving games by a tight end in school history: 136 yards against Vanderbilt and 159 against North Carolina.

Anyone who watched the eventual champs play last season should remember Bowers. The 6-4, 230-pound native of Napa, California, burst onto the scene as a freshman, finishing with 56 receptions for 882 yards and 13 touchdowns. He has five catches for 95 yards this year, getting plenty of time off during Georgia’s back-to-back blowouts.

Arik Gilbert appears to be the odd man out in Georgia’s ultra-deep position group. The former LSU starter and the No. 1 tight end prospect in the 2020 recruiting class doesn’t have a reception while playing behind Bowers and Darnell Washington. He caught 35 passes for 368 yards and two TDs as a freshman with the Tigers before entering the transfer portal.

He was briefly committed to Florida but ended up in Athens, about 80 miles from his home in Marietta, Georgia. Coach Kirby Smart said Gilbert’s lack of playing time has more to do with his practice habits than the depth chart.

The Oklahoma transfer landed at South Carolina along with quarterback Spencer Rattler. They already have chemistry, although Stogner has just six catches for 75 yards through two games. The 6-6, 251-pound senior from Plano, Texas, had 47 receptions for 654 yards and eight scores with the Sooners. And he enjoys blocking as much as anything else he does.

First-year LSU coach Brian Kelly called the son of Pro Football Hall of Famer Jason Taylor “the No. 1 surprise of camp.” Mason Taylor has five catches for 47 yards, including a 17-yarder that set up a late touchdown against Florida State.

“He’s been outstanding,” Kelly said, adding that Taylor has added 20 pounds. “I’ve been blessed. I’ve had some great tight ends. I’ve got seven of them right now who are active in the NFL. And Mason Taylor is as good as any freshman tight end that I’ve had.”

The Southern Cal transfer had three TD receptions in last week’s 59-3 romp over Central Arkansas, all from inside the 10-yard line. The 6-3, 240-pound sophomore from Tampa, Florida, has nine receptions for 61 yards. He caught seven balls for 109 yards and a score in six games with the Trojans in 2021. He landed in Oxford as part of the package deal with quarterback Jaxson Dart.

“There’s some inconsistency there because he’s a young player,” Kiffin said. “He needs to play more consistent because you can see the big-play potential.”

No one his size is supposed to move like that. But Washington has rare traits. The 6-7, 260-pound junior is a blocking beast as well as a threat to run by linebackers and post up –- or leap over — defensive backs. He has four catches for 66 yards, well on his way to surpass his two-year totals of 17 receptions for 320 yards and a score.

He already created a career highlight when he hurdled Oregon cornerback Bryan Addison in the team’s opener.

“Darnell Washington is in the best shape he’s been in,” Smart said recently, adding the big man can play “harder for longer.”

The SEC appears poised for talent at the position for years to come, too.

Tennessee and Georgia have commitments from the second- and third-rated tight-end recruits for 2023. The Vols ave a pledge from Ethan Davis of Suwanee, while the Dawgs are in line to land Pearce Spurlin of Santa Rosa Beach, Florida.