SEC suspends Tennessee WR Jennings for half of Vols' bowl 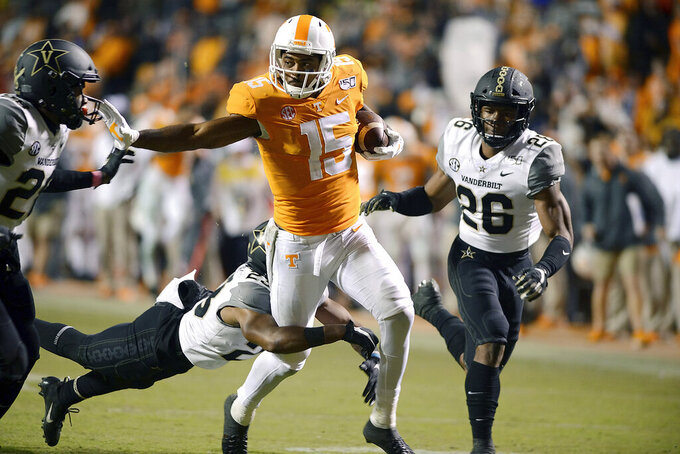 BIRMINGHAM, Ala. (AP) — The Southeastern Conference has suspended Tennessee wide receiver Jauan Jennings for the first half of the Volunteers' bowl game for what the league said was a flagrant personal foul late in a 28-10 victory over Vanderbilt.

Vanderbilt punt returner Justice Shelton-Mosley was heading out of bounds with just over three minutes left when Jennings hit him. Shelton-Mosley’s helmet appeared to come off as he slid toward Tennessee’s bench. Video showed that as Jennings was getting up after the play, his right cleat hit Shelton-Mosley’s head.

“Commissioner Sankey shared his perspective on the actions in question,” Tennessee athletic director Phillip Fulmer said in a statement released by the university. “We had a long conversation about the matter, and we will honor the suspension.

“Jauan has been nothing but outstanding for our team and the program this entire season.”

Tennessee (7-5) is bowl eligible for the first time since 2016. The Volunteers will learn their bowl destination and opponent Sunday.

Jennings, a fifth-year senior, has 57 catches for 942 yards and eight touchdowns to lead Tennessee in all three categories.