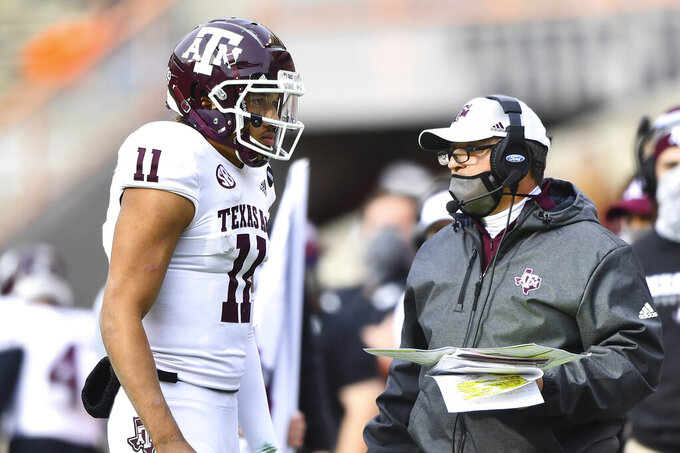 MIAMI GARDENS, Fla. (AP) — Jimbo Fisher's fondness of the Orange Bowl goes back to his youth, and he can still remember what a big deal it was to get in front of the television and wrap up every New Year's Day by watching the matchup.

The game means plenty to him.

He'd just rather not have been there this year.

But the Orange Bowl is what awaits Fisher and Texas A&M to end this season, after they fell one spot shy of a berth in the College Football Playoff. The Aggies (8-1) will take on North Carolina (8-3) in the game on Jan. 2.

“We're in a New Year's 6 game against a great opponent and we're very happy to be there," Fisher said. “There's no frustration at all."

Fisher lobbied for the Aggies to get one of the four playoff spots, saying Saturday that “if you’re going to pick the best four teams, we’re one of them.” And Aggies quarterback Kellen Mond didn't hide his thoughts when the playoff matchups — Alabama vs. Notre Dame, Clemson vs. Ohio State — were announced: “JOKE," he tweeted.

“Does A&M deserve to be in? Absolutely," North Carolina coach Mack Brown said.

Texas A&M has won seven consecutive games — tied for the fifth-longest such streak in the country — and lost only once this season, that being a 52-24 defeat at the hands of No. 1 Alabama in the Aggies’ second game this fall.

They then rallied from an 11-point second-half deficit to beat Florida and kickstart this winning streak, but it wasn’t enough to earn a playoff berth.

“You move on. That's life," Fisher said. “We've had a great opportunity. We've had a great year. We've done great things and we put ourselves in position to be in it. But we weren't. So, now it's time to move on. You want to be in it but at the same time, we're in the Orange Bowl, man."

“When it was all said and done, the committee decided that Notre Dame had earned its way to that fourth spot over a very good Texas A&M team," CFP selection committee chair Gary Barta said.

Putting North Carolina in the Orange Bowl was the easy part; the Tar Heels were locked into the game because they were the ACC’s highest-ranked team in the final CFP standings besides playoff-bound Clemson and Notre Dame. North Carolina won 62-26 at Miami on Dec. 12, a win that allowed the Tar Heels to leapfrog the Hurricanes in the CFP standings — otherwise, Miami would have likely been in the Orange Bowl on its home field.

Some of what to know about the Orange Bowl:

For now, the plan is to cap attendance at the game to roughly 13,000 fans, which is consistent with the protocols put in place by the Miami Dolphins for their games and Hurricanes games at Hard Rock Stadium this season. The 13,000-fan figure represents 20% capacity of the stadium, which will also play host to the CFP national championship game on Jan. 11.

The Orange Bowl coaches certainly know how to end seasons with victories. Fisher is 7-2 all-time in bowl games. Brown is 14-8 in the postseason, plus has been part of the Orange Bowl twice as an assistant coach.

For Fisher, it’s a return to a stadium where he’s gone 6-0 — including a pair of Orange Bowl victories. He went 4-0 at Miami when he was at Florida State, plus guided the Seminoles to Orange Bowl wins over Northern Illinois to end the 2012 season and Michigan to end the 2016 season.

Among the few blemishes on Fisher’s resume from those years at Florida State: He went 0-2 against North Carolina, the Tar Heels winning both of those matchups by identical 37-35 scores.

Texas A&M would finish 9-1 with a win, which would be the Aggies’ best record since going 10-0-1 in 1994. North Carolina won the Military Bowl last season and is seeking bowl victories in consecutive seasons for the first time since winning four straight from 1995 through 1998.