From Sooner to SMU, Mordecai starts with record 37 TD passes 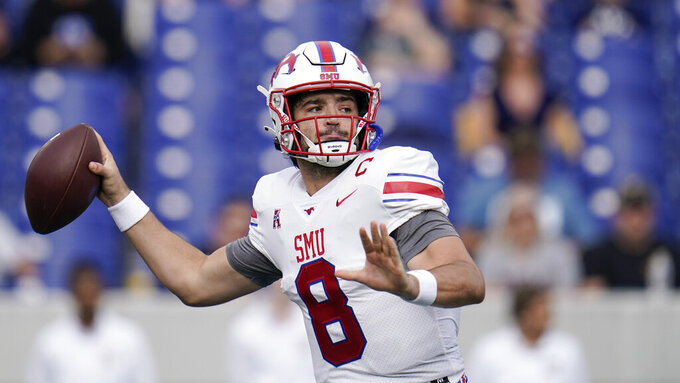 FILE - SMU quarterback Tanner Mordecai throws a pass against Navy during the first half of an NCAA college football game, Saturday, Oct. 9, 2021, in Annapolis, Md. Mordecai has already set a single-season SMU record with 37 touchdown passes after finally getting his opportunity to be a starting quarterback, which is no surprise to his former teammate at Oklahoma that he recruited to join him on the Hilltop. (AP Photo/Julio Cortez, File)

DALLAS (AP) — Tanner Mordecai has already set a single-season SMU record with 37 touchdown passes after finally getting his opportunity to be a starting quarterback, which is no surprise to the former Oklahoma teammate he recruited to join him on the Hilltop.

“I just knew it was a matter of time,” SMU and former Sooners tight end Grant Calcaterra said. “I think he kind of got unlucky in his last season at OU, not getting the starting job. He got COVID during camp, so he had like a couple of practices to really show what he could do. ... I knew that wherever he was going to go, once he decided to leave, that he was going to be successful.”

Mordecai has fit right into coach Sonny Dykes' big-pass offense at SMU, where he has already thrown for more than 300 yards eight times going into the game at third-ranked Cincinnati on Saturday.

The American Athletic Conference's leading passer is throwing for 326.4 yards per game with multiple TD passes in all 10 games. His seven TDs in the season opener that marked his starting debut set a single-game school record, and his 37 touchdowns overall rank second nationally.

Transfer players have played a big part in the resurgence of the Mustangs (8-2, 4-2 American) under Dykes, including former Texas quarterback Shane Buechele as their starter the past two seasons before going to the NFL.

"A lot of those guys have been guys that have been somewhere else, and either worked out pretty well and they wanted to come home, or just things didn’t work out the way that they hoped,” Dykes said. “I think Tanner’s the perfect example of that, where he’s gotten an opportunity to shine.”

A four-star recruit from Waco Midway High in Texas, not far from the Baylor campus, Mordecai first went to Oklahoma. The starting quarterbacks during his three seasons with the Sooners were Heisman Trophy winner Kyler Murray, Heisman runner-up Jalen Hurts after he was a graduate transfer from Alabama, and then five-star signee Spencer Rattler last year after Mordecai missed much of preseason camp with what was described then as an undisclosed injury.

Mordecai appeared in 12 games for the Sooners, completing 50 of 70 passes with four TDs and one interception. After he went into the transfer portal, Oklahoma coach Lincoln Riley said last December that the quarterback had been a “really good member” of the team and was ready to be a starter somewhere.

“He had some good competition while he was here,” Riley said. “He had some unfortunate events that made it tougher for him to compete, like getting injured during our competition this year.”

While Mordecai has flourished at SMU this season, Rattler struggled and the preseason AP All-American was replaced last month as the Sooners starter by another top freshman, Caleb Williams.

Calcaterra was Oklahoma's starting tight end as a sophomore in 2018, when he had two TD catches in the Big 12 championship game against Texas. He said he was retiring from football after the 2019 season due to concussions, but after a year away decided to return. He changed his initial commitment to Auburn after coach Gus Malzahn was fired, and started looking at other schools.

“I did whatever I could to get him to come here. ... I did a lot of recruiting,” Mordecai said. “It made the transition a lot smoother back when we first came in, but now we’re just having fun with it.”

They have been roommates since January at SMU. Calcaterra is the team's fourth-leading receiver with 37 catches for 451 yards and four TDs, after 41 catches for 637 yards in his 20 games over three seasons for Oklahoma.

Calcaterra said his passion for the game only grew was he was away from it, and that he is having a blast with Mordecai and the Mustangs.

“That worked out well for us," Dykes said of Mordecai's personal recruitment of Calcaterra. “I didn't know that we were getting two for one.”